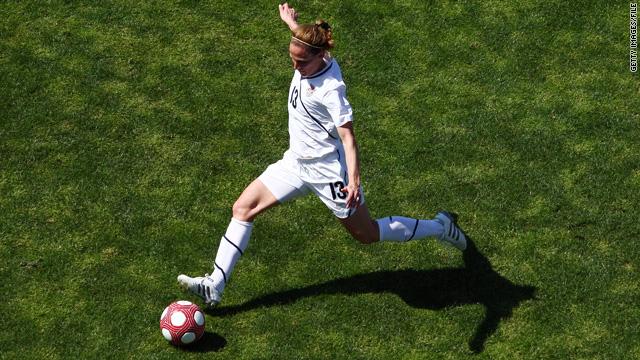 The last remaining active player from the U.S. team that won the inaugural women's soccer World Cup in 1991 - and the youngest and oldest woman to score for America - has called it a career.

Kristine Lilly, 39, has retired with 352 appearances for her national team, by far a world record for international soccer, the U.S. Soccer Federation said Wednesday. Her 130 international goals and 105 assists are second in U.S. history only to former teammate Mia Hamm.

Lilly, along with Hamm, Brandi Chastain, Joy Fawcett, Julie Foudy and Michelle Akers, was part of a core group that made the United States a women's soccer juggernaut, winning the 1991 and 1999 World Cups and the gold medal in the 1996 Olympics. She is the only woman to play in five World Cups and she retired after playing in part of the United States' qualifying campaign for the 2011 World Cup.

"It's one of those things that I didn't really know what it was going to feel like, but it's just time," Lilly told the U.S. Soccer Federation's web show "Studio 90" of her decision to retire. "I gave myself till the end of the year and after qualifiers ŌĆ” and I wanted to make sure I was well rested and making a decision with a good mindset and good rest."

One of Lilly's career-defining moments came in 1999, during the nationally televised World Cup final against China in California's Rose Bowl.┬ĀA highlight┬Āwas the┬Āwinning penalty kick by Chastain, who memorably took her shirt off to celebrate. But the United States wouldn't have gotten to the penalty shootout if it weren't for midfielder Lilly.

With the game tied 0-0 in sudden-death overtime, Lilly - standing at the U.S. goal line - jumped to head away a shot from China's Fan Yunjie. The shot had beaten U.S. goalkeeper Briana Scurry, but Lilly's header saved the game for the Americans.

"I remember looking at Julie Foudy as we ran back up the field and the look on our faces told that story. We started laughing: 'Did that just really happen?'" she recalled on the U.S. Soccer Federation's website.

Lilly went on to score in the penalty shootout that followed the scoreless overtime, and Chastain eventually followed to put the game away.

Lilly also won a gold medal in the 2004 Olympics - the last time she, Hamm, Foudy, Chastain and Fawcett would play together.

Having debuted for the U.S. on August, 3, 1987, she became the youngest woman to score for her country 10 days later at age 16. She's also the oldest to score for the United States, with her last goal coming May 22 in a 4-0 win against Germany.

The Connecticut native and mother of a 2-year-old daughter also leaves the club team she captained, the Boston Breakers of Women's Professional Soccer. She plans to continue running a soccer academy in her hometown and will be involved with her other soccer camps, the U.S. Soccer Federation said.