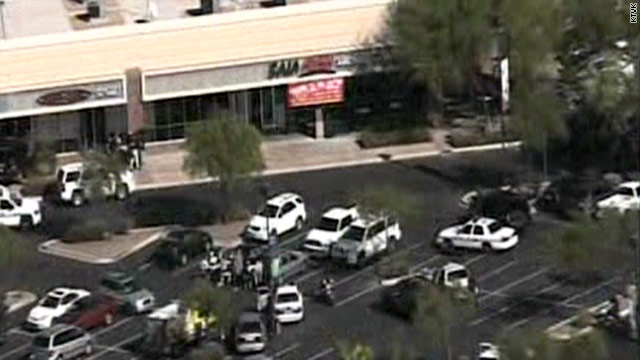 Police converged on a mall in suburban Phoenix after a fugitive was spotted there Wednesday, the U.S. marshals say.
January 5th, 2011
08:08 PM ET

[Updated at 8:08 p.m.] The suspect arrested in connection with today's Chandler mall shooting has been identified as Adam Hernandez, Chandler Police Dept. Det. David Ramer said. After a complete police sweep, the mall is now open and fully operational, he said.

[Updated at 6:11 p.m.] A suspect who surrendered at a restaurant near a mall in Chandler, Arizona, is not federal fugitive Daniel Munoz Perez, police said Wednesday.

[Updated at 4:56 p.m.] A woman who fled the restaurant has told CNN that she saw the suspect being taken into police custody.

[Updated at 4:37 p.m.] Detective David Ramer of the Chandler police said authorities are trying to establish communications with the suspect in a Baja Fresh restaurant in Arizona.

However, he said, police still cannot confirm a hostage situation or that the man in the restaurant is Daniel Munoz Perez. Federal marshals earlier confirmed the suspect was Munoz, who is wanted for aggravated assault for allegedly shooting at a police officer last month.

"I wish they would confirm it with us," he told CNN.

Ramer said the only thing of which he is certain is that the man in the restaurant is the same person who was engaged in a shootout with undercover officers outside the Chandler Fashion Center earlier Wednesday.

In addition to establishing communications with the suspect, police also will be setting up tactically to ensure he has no escape routes, the detective said.

[Updated at 4:02 p.m.] Law enforcement officials tell CNN affiliate KPHO that a sniper with the Maricopa County Sheriff's Office confirms that two hostages are being held at a restaurant near the Chandler mall.

[Updated at 3:58 p.m.] CNN is now receiving conflicting reports on whether hostages are being held at a restaurant near the Chandler Fashion Center in Arizona.

Though a U.S. marshal told CNN that the fugitive was holding hostages at a nearby Baja Fresh, Chandler Detective David Ramer said the reports were unconfirmed.

Ramer said he also could not confirm if the suspect accused of firing shots at the mall is Daniel Perez Munoz. Marshals earlier identified the man as Munoz and said he was wanted in connection with a police shootout last month.

[Updated at 3:53 p.m.] Hostages are being held inside the Baja Fresh restaurant near the Chandler, Arizona, mall in suburban Phoenix, U.S. Marshal David Gonzales said.

[Updated at 3:45 p.m.] A retired Phoenix, Arizona, police sergeant tells CNN that a problem could arise apprehending Daniel Perez Munoz if the fugitive attempts to hide among mall patrons.

Ex-Sgt. Andy Hill further said that the shape of the upscale Chandler Fashion Center, which is similar to the letter "A," could make finding the fugitive difficult. The most important charge of police on the scene, he said, is evacuating everyone inside the shopping center.

Hill predicts it could take "a long time to find this person."

[Updated at 3:20 p.m.] Daniel Munoz Perez, the suspect being sought by federal marshals after being seen at an Arizona mall Wednesday, was accidentally released from prison last month, CNN affiliate KPHO-TV reports.

The 25-year-old man was accused of shooting at Arizona Department of Public Safety officers December 11 outside a home in Casa Grande, a law enforcement source told KPHO.

Munoz was injured in the shootout, admitted to a Phoenix hospital and held in another county's jail before he was turned over to Pinal County, the station reported.

The Pinal County Sheriff's Office, however, said it never received the charging documents for Munoz and he was released on a $320 misdemeanor bond December 17, according to KPHO.

[Updated at 3:14 p.m.] Helicopter video shows police officers crouching near a Baja Fresh restaurant with their guns drawn, and more shots may have been fired at the Chandler, Arizona, mall, reports CNN affiliate KPHO-TV.

[Updated at 3:01 p.m.] U.S. marshals in Arizona say they are looking for a fugitive wanted for the attempted murder of a police officer.

The suspect, who was located at the Chandler Fashion Center on Wednesday, has been identified as Daniel Munoz Perez, U.S. Marshal David Gonzalez said. When security officers saw him, Perez began shooting then disappeared into the mall, Gonzalez said.

Federal marshals have been looking for Perez since December 16 when he was accidentally released from the Pinal County Sheriff's Office, he said.

[Posted at 2:54 p.m.] Police say they are looking for a fugitive at the Phoenix suburban mall where shots were fired earlier.

[Updated at 2:27] Shots were fired at a mall in Chandler, Arizona, on Wednesday, forcing the evacuation of the shopping center, authorities said.

Read CNN's full coverage of the shots fired at the Chandler, Arizona, mall