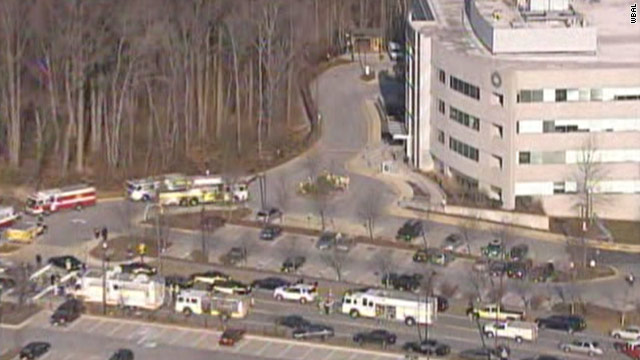 Emergency officials respond to the scene in Annapolis, Maryland after devices were found in government buildings.
January 6th, 2011
05:50 PM ET

The packages were sent through the mail to two state office buildings. One was addressed to Gov. Martin O'Malley, said Maryland State Police spokesman Greg Shipley. The other was addressed to the Maryland Department of Transportation, officials said.

One of the packages had holiday stamps and both resembled the shape of a book, police said.

Authorities responded to devices found in the mailroom of a state House office building in Annapolis, Maryland, and at the Maryland Department of Transportation headquarters in Hanover, Maryland, said Philip McGowan, a spokesman for Annapolis Mayor Joshua Cohen.

CNN affiliate WTOP reported that two packages "gave off a small explosion or flare-up when they were opened" at two Maryland state government buildings. One package was at the Jeffrey Building on Francis Street in Annapolis and another was at the Department of Transportation building in Hanover, the station said. Hanover is southwest of Baltimore.

The Jeffrey Building in Annapolis houses the state Homeland Security office, the Secretary of State and Veterans Affairs offices and some divisions of the governor's office, according to state property managers.

The Annapolis police bomb squad and firefighters are responding, McGowan told CNN. The Federal Bureau of Investigation and the state bomb squad are also rushing to the buildings, he said.

Oh god. I meant to say a moment of LEVITY. I need more sleep. Lol
sarasidnerCNN