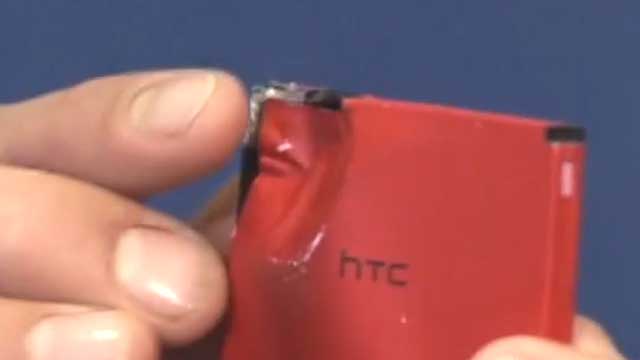 This cell phone prevented a bullet from hitting a man when he was shot at an Atlanta nightclub.
January 7th, 2011
11:15 AM ET

Phone drops death's call – Some may think cell phones can kill you, but an Atlanta valet would argue otherwise. After being shot in the chest outside a nightclub, the stunned man reached into his bullet-holed coat and pulled out his now dented cell phone. I wonder if EMS kept snapping their fingers and asking, "Can you hear me now?"

CNN infiltrates the gadget nerd-dom– CNN's Dan Simon unveils some of the latest in futuristic gadgetry at the Consumer Electronic Show in Las Vegas, including a 92-inch 3-D TV as thin as a quarter. It'll cost you $6,000, but why does your kid really need college anyway?

Refugees risk death to return home – CNN's Ben Wedeman tells the story of Southern Sudanese refugees returning to their homes just days before a referendum will decide whether the country is split in two. The split could make the already unstable country even more volatile, leaving these refugees to an uncertain fate.

Colombian authorities said they have confiscated a shipment of 3,493 shark fins which were to be illegally traffickâ€twitter.com/i/web/status/1â€¦KM
cnni

12:01 am ET September 25, 2021 RETWEET
Two US researchers who developed the technology that underlies both the Moderna and Pfizer/BioNTech Covid-19 vaccinâ€twitter.com/i/web/status/1â€¦UY
cnni