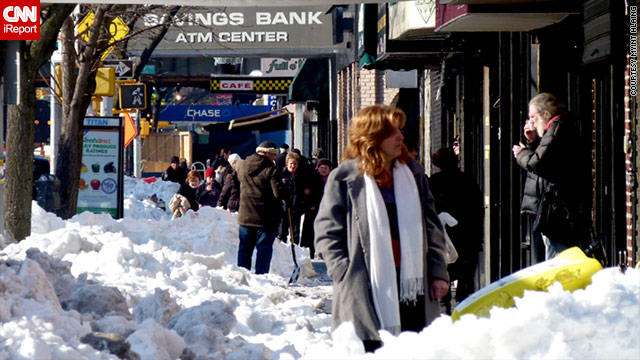 New Yorkers, seen battling last month's blizzard, are preparing for another round of snow this weekend.
January 7th, 2011
10:28 AM ET

With memories of a monster Christmas blizzard still fresh, another blast of winter began charging across eastern states Friday, with snow predicted as far south as middle Georgia.

A large complex winter system stretched across the northeast Friday, making for messy commutes in cities like Philadelphia. The good news? The storm was moving fast and wasn't predicted to paralyze the area as the massive storm did less than two weeks ago.

But by Friday morning, 49 flights at New York's LaGuardia Airport had been canceled as snow blanketed runways and hampered pilot visibility, according to spokesman Steve Coleman of the Port Authority of New York and New Jersey.

Several major airlines - including American, United/Continental, U.S. Airways and Delta - announced that customers could voluntarily reschedule flights to and from snow-affected areas without penalty.

"In history's memory, Wallis Simpson is seen as the temptress who lured a ruler from his throne," Kate Williams wriâ€twitter.com/i/web/status/1â€¦Pn
cnni