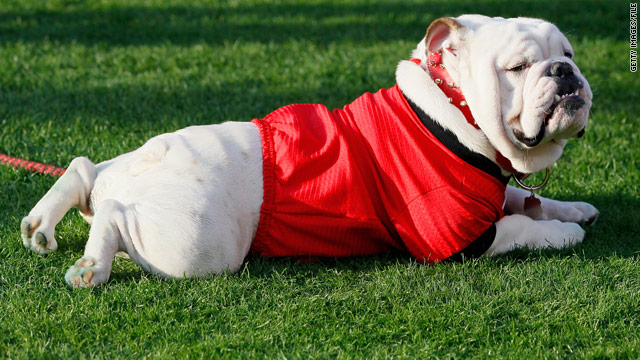 Uga VIII missed the Liberty Bowl game because of an illness that turned out to be lymphoma.
January 7th, 2011
10:00 PM ET

Uga VIII, the University of Georgia's athletic mascot, has been diagnosed with lymphoma, the school said Friday.

The English bulldog missed the Liberty Bowl on December 30 because of a gastrointestinal condition, the school said. Russ, the half-brother of Uga VII, filled in for him.

Uga VIII, whose registered name is Big Bad Bruce, is expected to appear at athletic events as his health allows. He is responding well to treatment at the UGA College of Veterinary Medicine. His primary veterinarian is his namesake, Dr. Bruce Hollett.

Uga VIII was introduced to Georgia fans at the October 16 Homecoming football game against Vanderbilt. He is the great-great-great-great-great grandson of the original Uga. The Seilers, of Savannah, have provided mascots for UGA sporting events since 1956.