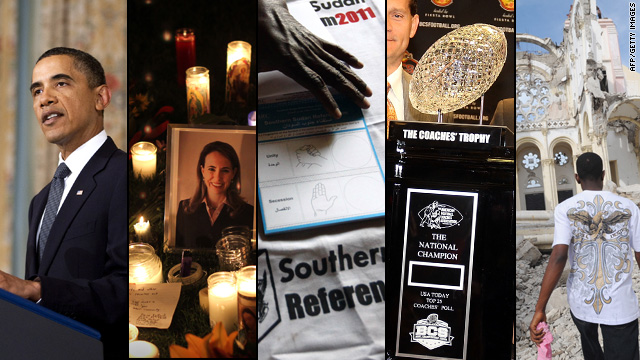 A suspect has been charged with federal crimes following Saturday's shooting in Arizona that killed six people, including U.S. District Judge John Roll, and wounded 14, including U.S. Rep. Gabrielle Giffords. But developments and ramifications - legal, medical and political - will unfold throughout the week.

Jared Lee Loughner, 22, has been charged with attempting to kill a member of Congress, first-degree murder and attempted murder. But those counts involve only victims who worked for the federal government, and state prosecutors could bring charges in the remaining cases. Loughner is scheduled to make an initial appearance before a federal magistrate in Phoenix on Monday.

Giffords, who was shot in the head at a political event outside a grocery store in Tucson, has been able to communicate with physicians by following simple commands, a doctor said Sunday. One physician said he didn't want to speculate on her recovery process, but said it is not uncommon for people with such injuries to be in an intensive care unit for at least a week and hospitalized for two to three weeks before beginning a rehabilitative phase that could last weeks to months.

All legislation on the U.S. House schedule for the coming week has been postponed, meaning the House will not vote this week on the repeal of health care reform as previously anticipated. However, the House is expected to issue tributes and consider at least one resolution honoring the shooting victims this week. President Barack Obama has called for a national moment of silence at 11 a.m. Monday to honor the victims.

Here's a look at some of the other stories we plan to follow this week:

Obama is expected to meet with French President Nicolas Sarkozy at the White House on Monday to discuss foreign policy and security. Sarkozy, whose country is assuming the presidency of the G-8 and G-20 economic groups this year, also is interested in having the global economy be less reliant on the U.S. dollar.  Meanwhile, France is sending its defense minister to Niger this week after two French hostages were executed in that West African country. The French Defense Ministry has said the people behind the kidnapping probably were part of al Qaeda in the Islamic Maghreb. That group hasn't claimed responsibility, but the group's leader has warned France that if it does not withdraw its troops from Afghanistan, more French nationals would be endangered.

Also in Washington: Clinton's address on China and RNC election

Secretary of State Hillary Clinton is expected to give a major address Friday at the State Department on a vision for U.S.-China relations in the 21st century. Also that day, the Republican National Committee will elect its next chairman, with incumbent Michael Steele trying to fend of several challengers.

Sudanese begin voting on whether to split nation

People in Sudan's southern autonomous region will cast ballots over the next seven days on whether to split from the north, a move that would create the world's newest country. The two sides fought a war that killed 2 million people from 1983 to 2005, when a peace treaty set the stage for the vote that began Sunday. The south, which has most of Sudan's oil, is heavily populated by black Christians and animists, whereas the government of the north is dominated by Arab Muslims. The vote has sparked fears of renewed violence among rival southern groups or between the north and south, though Sudan's president has said his government would accept the results of the south's referendum.

Wednesday will mark a full year since an earthquake that killed tens of thousands of people in Haiti. Tent cities, rubble and abject poverty remain in the country despite pledges of massive international aid.  The Caribbean nation also was battered by Hurricane Tomas and a cholera outbreak in 2010. CNN's Anderson Cooper will report live from Haiti on "AC 360°" on Tuesday and Wednesday. Also this week, look for a report from CNN's Ivan Watson, who will examine the role Voodoo is playing in the way some Haitians are coping with the disasters.

Cuba's Public Enemy No. 1 goes on trial - in Texas

Luis Posada Carriles is going on trial, but not where Cuba's government would like to see him face charges. Posada, whom Cuba wants to see charged in connection with alleged assassination plots and terrorist bombings in that country, is set to go on trial in El Paso, Texas, on Monday, charged with lying about how he entered the United States. Posada, a foe of the Cuban Revolution, was once a CIA operative.

Twenty-three days after it began, the NCAA Division I bowl season finally comes to an end Monday with the BCS national championship game in Scottsdale, Arizona, where Auburn will face Oregon. Previewing the game, SI.com's Stewart Mandel writes that although Oregon's offense gets plenty of attention, its unsung defense - which has limited foes to 18.4 points per game - has done its part to get the Ducks to the title game.