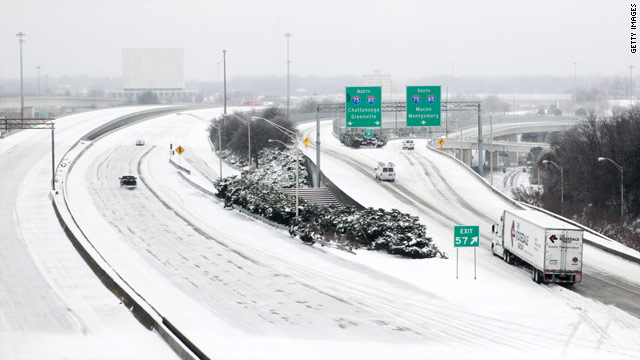 Travel affected as winter storm rolls across the South

A major winter storm system was rolling across the southeastern United States Sunday, sending out shocks of snow, freezing rain and sleet, and forcing some airlines to cancel flights.

AirTran Airways canceled 14 flights Sunday, most of them heading into Atlanta, in order to have fewer aircraft on the ground there at the time the storm hits, spokesman Christopher White said. Another 270 flights were canceled for Monday, which represents a majority of the Atlanta-bound flights for the airline.

There will be a handful of arrivals and departures only, White said.

6:23 pm ET January 16, 2021 RETWEET
More than half of the 22, billion-dollar weather disasters in 2020 were due to severe storms, which spawned deadlyâ€twitter.com/i/web/status/1â€¦Ky
CNNweather

6:29 am ET January 16, 2021 RETWEET
â€śwarned of a violent scenario in which â€śCongress itselfâ€ť could be the target of angry supporters of President Ttwitter.com/i/web/status/1â€¦cSTGrQCC
susancandiotti