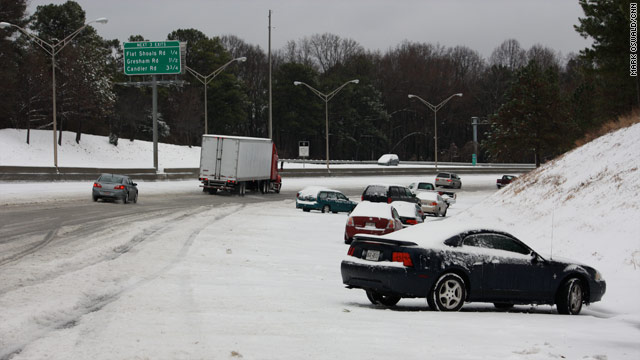 Cars have problems navigating Atlanta roads on Monday after a winter storm left the city covered in snow and ice, with little resources to clean it up.
January 10th, 2011
10:36 AM ET

Treacherous travel conditions, power outages and school cancellations stretched across the Southeast as freezing rain and sleet followed on the heels of a heavy snow that blanketed the region over the weekend.

Schools and government offices shut their doors from Arkansas to the Carolinas, while power utilities mobilized crews for widespread power outages. CNN meteorologist Dave Hennen said below-freezing temperatures are expected through Tuesday, and continued precipitation will leave a heavy coating of ice on power lines and trees, which could cause outages.

The power company Entergy reported about 4,000 people without power in Mississippi. About 200 people in north Georgia were still without electricity after snow sent tree limbs into power lines, according to Georgia Electric Membership Corp.

Winter storm warnings were in effect Monday for parts of Arkansas, Tennessee, Mississippi, Alabama, Georgia and the Carolinas, and parts of southern Alabama were under an ice storm warning.

"The reaction to Biles' decision suggests we simply aren't where we need to be when it comes to understanding mentaâ€twitter.com/i/web/status/1â€¦sz
cnni

1:01 pm ET July 31, 2021 RETWEET
There are over 80 active large fires burning in the US and the two largest have seared hundreds of thousands of acrâ€twitter.com/i/web/status/1â€¦jF
CNNweather