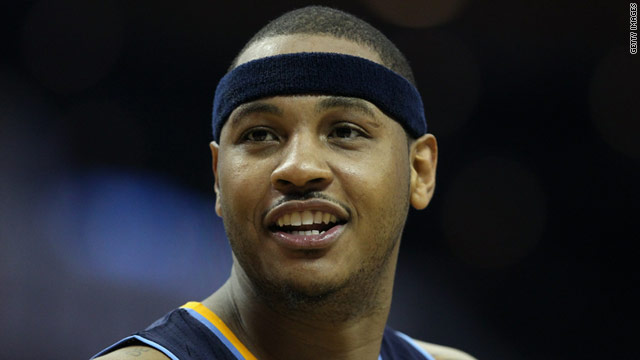 SI.com: Where is Melo headed?

Is Carmelo Anthony East Coast-bound? It sure seems that way with reports surfacing that the Nets are closing in on a deal that would send the Nuggets star forward to New Jersey.

Several league sources confirmed to SI.com's Chris Mannix that the Nets are in the final stages of a massive three-team trade deal with the Nuggets and Detroit Pistons that would send Melo as well as Chauncey Billups, Richard Hamilton and Anthony Carter to Jersey; Devin Harris, Derrick Favors, Anthony Morrow, Ben Uzoh and Stephen Graham to Denver; and Troy Murphy and Johan Petro to Detroit.

In return, the Nuggets and Pistons would also receive first-round draft picks from the Nets, something Denver is certainly in the market for as it assumes the cost of both Murphy and Petro's contracts.

But obvious talent aside, what kind of impact would the addition of Anthony have on the Nets? Despite bringing talent to the forward position, New Jersey would still not be considered among the league's best in the East, according to SI.com's Ian Thomsen. While it would have beaten out the Knicks for a claim on Melo, he won't be enough to raise the team to Celtics-like heights.

And if somehow the deal falls through? If Anthony rejects the trade? Well, that would put both New Jersey and Denver in very unfavorable positions as the Nets will have lost one of the sport's top free agents, while Denver would have to make a deal with the Knicks, find a team willing to "rent" Anthony out for the rest of the season or convince him to accept an extension.

As we wait on word about what Anthony's next move is, Monday night's can't-miss game to check out is the BCS Championship showdown between the Auburn Tigers and Oregon Ducks.

Auburn vs. Oregon (8:30 p.m. ET - No. 1-ranked Auburn and No. 2-ranked Oregon will face off Monday night in the BCS Championship at the University of Phoenix Stadium.

25 - Number of consecutive wins the Duke Blue Devils have amassed. Their 25th victory came with a 71-64 rout of Maryland on Sunday night.

15 - Number of finalists for inclusion in this year's Pro-Football Hall of Fame class. Among them: running backs Curtis Martin, Jerome Bettis and Marshall Faulk and cornerback Deion Sanders.