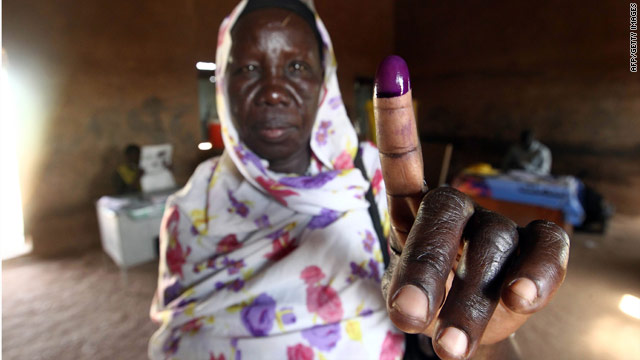 A woman shows her inked finger after voting Monday in a landmark independence referendum in Sudan.
January 10th, 2011
10:42 AM ET

Thousands more people streamed to polling places in a historic referendum on independence for Southern Sudan on Monday even as violence flared in a disputed region between north and south.

Former U.S. President Jimmy Carter, meanwhile, said Sudanese President Omar al-Bashir told him that Southern Sudan should not have to shoulder Sudan's debt should it secede from the county. The question of how to split Sudan's debt is one of several issues that would have to be resolved if the south votes for independence, as is widely expected.

"I spoke with President al-Bashir. He said the entire debt should be assigned to north Sudan and not to the southern part," Carter told CNN Monday morning. "So, in a way, Southern Sudan is starting with a clean sheet on debt. They'll have to make some arrangement for other sources of income, of course."

The south would become independent in July if voters choose independence and no other obstacles emerge. Voting began on Sunday and will end Saturday.