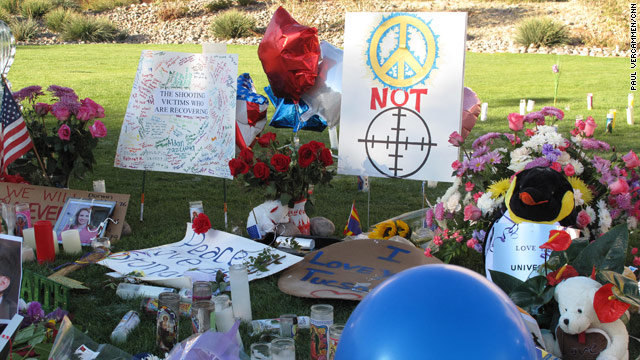 A shrine to the victims of a shooting rampage Saturday in Tucson, Arizona, grows larger Tuesday.
January 11th, 2011
09:15 PM ET

[Updated at 9:15 p.m. ET] Arizona Gov. Jan Brewer signed emergency legislation Tuesday night setting limitations on protests at funerals. The bill is aimed at the Westboro Baptist Church, which plans to picket the funerals of those who died in Saturday's shootings.

[Posted at 5:50 p.m. ET] The Arizona Legislature unanimously has passed a bill meant to stop church from protesting at funerals of Tucson shooting victims.

The vote was 29-0 in the state Senate and 58-0 in the state House. A spokesman for Gov. Jan Brewer earlier told CNN that she was prepared to sign the bill.

Read more about the legislation

"Ultimately, the key to reducing everyone's risk from Covid-19 â€” and to ending the pandemic â€” is for all of us totwitter.com/i/web/status/1â€¦P6G9jM
cnni

2:30 pm ET October 18, 2021 RETWEET
Companies and people who want to cancel out the impact of their emissions on the climate often turn to something caâ€twitter.com/i/web/status/1â€¦sJ
cnni

2:00 pm ET October 18, 2021 RETWEET
A man was arrested for allegedly sexually assaulting a woman on a SEPTA train in Philadelphia last week, even as aâ€twitter.com/i/web/status/1â€¦8z
cnni