Alabama's mask mandate is being extended to April 9. The governor says it has been "the right thing to do," but itãtwitter.com/i/web/status/1ãÎi2

Italy blocks the export of Covid-19 vaccines to Australia in a dramatic escalation of the EU's dispute with AstraZeãtwitter.com/i/web/status/1ãÎmw

A 15-year-old boy who was shot Monday at a junior high school in Pine Bluff, Arkansas, has died from his injuries,ãtwitter.com/i/web/status/1ãÎSq

Fewer than a third of prominent pro-democracy activists charged under a new national security law are granted bailãtwitter.com/i/web/status/1ãÎJx

A policing bill named after George Floyd has passed the House for a second time, after Democrats reintroduced it wiãtwitter.com/i/web/status/1ãÎgf 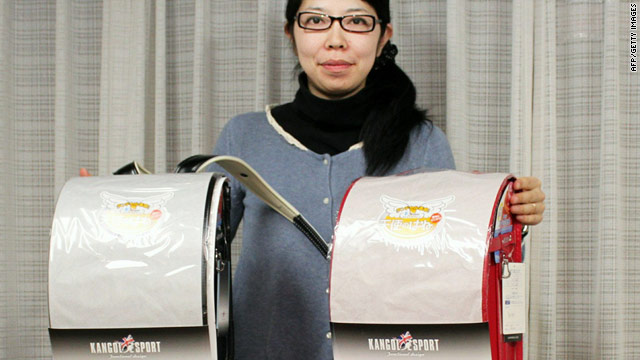 A children's welfare center worker in Nagano poses with donations that say the gifts are from "Naoto Date," the ring name of a comic character.
January 11th, 2011
11:32 AM ET

Children's homes and other social service facilities across Japan are reporting a rash of donations in the name of a 1960s comic superhero and other fictional characters.

Most of the anonymous donations are being made in the name of "Naoto Date," a hero of pro wrestling comics in the "Tiger Mask" series, which dates to the 1960s, according to media reports. In the series, the hero, an orphan himself, make donations to children's homes, according to a Reuters report.

The donation flurry began on Christmas Day, when 10 leather school backpacks, valued at several hundred dollars each, were left at a Tokyo child care facility.

This week, donors are giving under the names of other cartoon characters, according to a report in the Mainichi Daily News.

In Okayama prefecture Tuesday, backpacks were dropped off at a children's care home in the name of Momotaro (Peach Boy), a folktale hero, Mainichi reported.

"I was touched by the emergence of 'Naoto Date' across the nation. I hope all the kind people's wishes will spread across the country and that these gestures will brighten the future of children," a letter left with those gifts said. It was signed, "Your hero Momotaro, not Naoto Date," according to the Mainichi report.

At another facility gifts were left in the name of "Jo Yabuki," an old cartoon character, according to a Japan Times report.

The donations are giving Japanese citizens something to find hope in during troubling economic times. Average citizens can be part of "a heartwarming story in a time of social anxiety," national broadcaster NHK report.

A group of major oil producers has agreed to extend production cuts for another month despite a recent price surge,ãtwitter.com/i/web/status/1ãÎdw
cnni

2:45 pm ET March 4, 2021 RETWEET
A Renaissance-era helmet and body armor have been returned to the Louvre museum in Paris almost 40 years after theyãtwitter.com/i/web/status/1ãÎPM
cnni