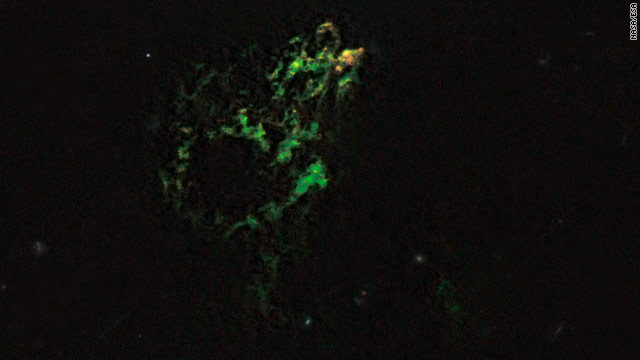 In a galaxy far, far away: The Hubble Space Telescope has captured this image of Hanny's Voorwerp.
January 11th, 2011
10:04 AM ET

There's a green blob in space, but unlike a bad science fiction movie, it's not coming to take over Earth. Probably.

The Hubble Space Telescope has captured an image of a green cloud of gas about 650 million light-years from Earth. It's been named Hanny's Voorwerp, Dutch for Hanny's Object.

The object is illuminated by a beam of light from a quasar that may have gone dark 200,000 years ago, according to the Space Telescope Science Institute in Baltimore.

The Voorwerp is about the size of our Milky Way galaxy and is part of a 300,000-light-year-long stream of gas, the institute says. The green color is from glowing oxygen.

What appears to be a gaping hole in Hanny's Voorwerp actually may be a shadow cast by an object in the quasar's light path, according to the institute.

"This phenomenon is similar to a fly on a movie projector lens casting a shadow on a movie screen," the institute says.

The object may have been formed by a collision of two galaxies, according to the institute.

But don't worry. It won't bump into our galaxy within our lifetime.