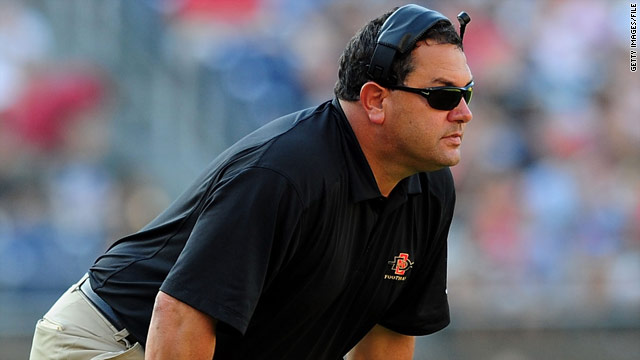 After the University of Michigan fired head football coach Rich Rodriguez this month, some fans clamored for a "Michigan man," someone - unlike Rodriguez - who was previously connected to the storied program. If that was their main condition, they have gotten their wish.

"We are pleased to announce the hiring of Brady," Michigan Athletic Director Dave Brandon said in a statement. "He is a terrific coach and will be a great ambassador and leader for our football program. We look forward to having him build a championship program on the field and in the classroom."

The announcement of the hiring of Hoke - who also was the head coach of his alma mater, Ball State, from 2003 to 2008 - came after media reports that Louisiana State University head coach Les Miles, who also had been a Michigan assistant and was courted by Michigan after Rodriguez's firing, decided to stay at LSU.

Hoke was named the 2010 Mountain West Conference coach of the year after guiding San Diego State to a 9-4 record and its first bowl game in 12 years. The Aztecs beat Navy 35-14 in the Poinsettia Bowl.

Rodriguez was fired last week after a stormy three years at the team's helm. Michigan went 3-9 in his first year - the program's first losing season since 1967 - and 5-7 the next. The Wolverines went 7-6 in his third year, including a 38-point loss to Mississippi State in the Gator Bowl - their largest margin of loss ever in any bowl game.