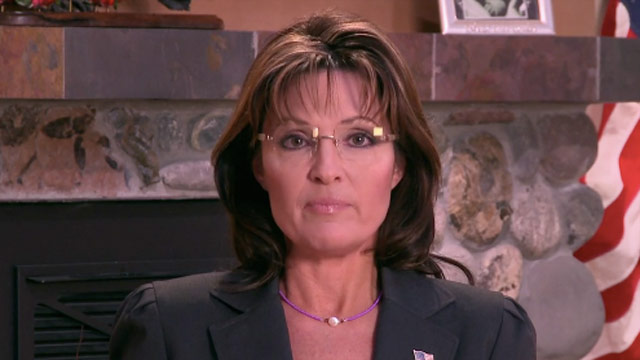 Sarah Palin has spoken out against those trying to place blame for Arizona shootings.
January 12th, 2011
12:31 PM ET

Sarah Palin spoke out on the Arizona shootings Wednesday, calling the events "tragic" and sharply chastising those who have suggested charged rhetoric from her and others on the right may have motivated the killings.

"Like many, I've spent the past few days reflecting on what happened and praying for guidance. After this shocking tragedy, I listened at first puzzled, then with concern, and now with sadness, to the irresponsible statements from people attempting to apportion blame for this terrible event," Palin said in a video posted on her Facebook page.

"Acts of monstrous criminality stand on their own. They begin and end with the criminals who commit them, not collectively with all the citizens of a state, not with those who listen to talk radio, not with maps of swing districts used by both sides of the aisle, not with law-abiding citizens who respectfully exercise their First Amendment rights at campaign rallies, not with those who proudly voted in the last election," the former Alaska governor said.

Palin's statements come in the wake of suggestions from some Democrats and media commentators that her political rhetoric over the last year may be linked in some way to the shooting Saturday that left Democratic U.S. Rep. Gabrielle Giffords in critical condition.

Some critics have cited a Facebook posting by Palin last march that placed a crosshair over several Democratic-controlled congressional districts, including that of Giffords. Palin also tweeted at the time: "Commonsense Conservatives & lovers of America: "Don't Retreat, Instead - RELOAD!"

But in her statement Wednesday, Palin said any effort to connect statements by her or others to the shootings amounts to a "blood libel."

An unusual fish with teeth as sharp as glass and a body shaped like a football washed ashore on a California beach‚Ätwitter.com/i/web/status/1‚Ä¶80
cnni

1:52 am ET May 12, 2021 RETWEET
One of the Earth's longest-flying spacecraft has detected a "persistent hum" beyond our solar system, according to‚Ätwitter.com/i/web/status/1‚Ä¶Dx
cnni

1:31 am ET May 12, 2021 RETWEET
"The deals are symbolic of how China and Russia's international vaccine goals are increasingly aligned, as they ass‚Ätwitter.com/i/web/status/1‚Ä¶cE
cnni

1:01 am ET May 12, 2021 RETWEET
This manicure embeds a microchip into your fingernails -- and can be used as a contactless solution to business car‚Ätwitter.com/i/web/status/1‚Ä¶bF
cnni