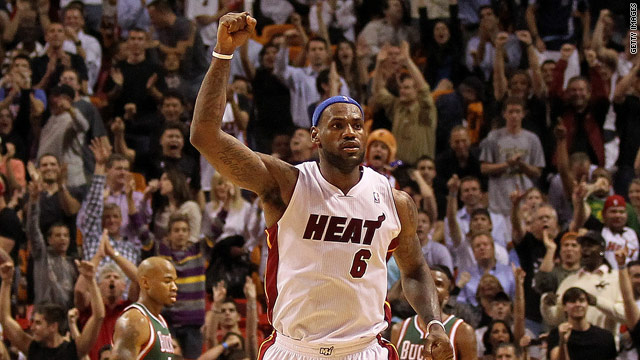 When LeBron James made "The Decision" on national television over the summer, it was met with an uproar, was deemed a public relations nightmare and alienated a city that once adored him.

Shortly after the Los Angeles Lakers annihilated the Cleveland Cavaliers 112-57 last night, LeBron took to Twitter to vent a little frustration and kick his former team while it was down.

"Crazy. Karma is a b****. Gets you every time. Its (sic) not good to wish bad on anybody. God sees everything!" he tweeted.

The tweet was pointed at the Cavaliers and his doubters, particularly Cavs owner Dan Gilbert, who infamously penned a ranting letter to Cavs season-ticket holders badmouthing LeBron shortly after he bolted for Miami last summer. Among the many insults and promises Gilbert launched at LeBronÂ was the claim that "bad karma" would catch up to the star.

If that's true, it has yet to take effect. After a slow start, Miami has won 21 of its past 22 games and owns the Eastern Conference's best record at 30-9. The Cavs, on the other side of the spectrum, have lost 21 of their past 22 games and 11 straight, including last night's embarrassment in Los Angeles. Cleveland coach Byron Scott said his team looked "scared to death" in the 55-point blowout, and his team's 57 points marked the fewest scored against the Lakers in the shot clock era.

The game caught most of the league's attention, including LeBron's. SI.com's Zach Lowe breaks down the tweet and gives his take on LeBron's latest public relations nightmare.

No. 5 Pittsburgh at No. 22 Georgetown (7 p.m., ESPN): Georgetown looks to avoid its third consecutive loss. Pittsburgh has won five straight since losing to Tennessee on Dec. 11.

No. 18 Louisville at No. 7 Villanova (7 p.m., ESPN2): Another ranked Big East battle pits the Wildcats, winners of 10 in a row, against the Cardinals, whom they defeated 92-84 in last season's lone matchup.

Oklahoma City Thunder at Houston Rockets (8:30 p.m., NBATV): Coming off a 40-point performance, Kevin Durant and the Thunder look to avenge an early season loss to the Rockets tonight in Houston.

50-50: Chances Carmelo Anthony ends up a New York Knick, according to a source in the New York Daily News. Last night, 'Melo guaranteed he would still be with the Nuggets come Thursday, when the Miami Heat come to play.

113: Hits Eagles quarterback Michael Vick was exposed to in just his final two games of the season, according to SI.com's Peter King.