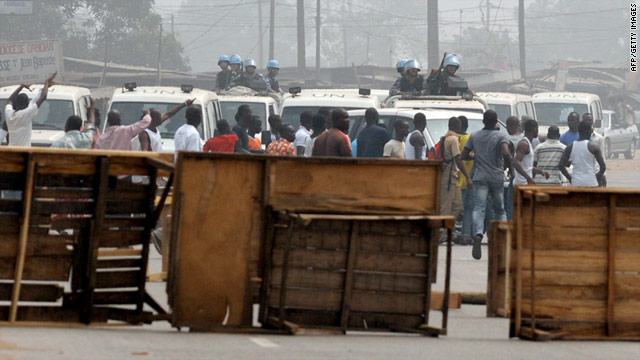 At least 10 people died on Tuesday as the fallout from Ivory Coast's disputed election worsened.
January 12th, 2011
10:21 AM ET

At least five police officers were killed Tuesday night in what authorities said was a targeted attack in an Abidjan neighborhood, a police source said Wednesday.

The attack by heavily armed gunmen occurred in the densely populated Abobo area of the city, the source said.

Amnesty International issued a statement warning of a fresh outbreak of violence in the wake of the five deaths, which it said happened early Wednesday.

"Some of the worst armed clashes so far broke out in the city of Abidjan today," the organization said. An unnamed eyewitness told Amnesty International they heard "heavy exchanges of fire" around midnight, the statement said, and this morning they saw "three military vehicles burnt out" and the body of a member of the security forces.

Tuesday, five people were killed in clashes between police and supporters of the nation's president-elect amid an ongoing political standoff in the West African nation.

10:31 pm ET January 23, 2020 RETWEET
It's the busiest time of the year for So Man-fung Peter, one of the most famous geomancy consultants in Hong Kong.ŌĆtwitter.com/i/web/status/1ŌĆ”yE
cnni

10:31 pm ET January 23, 2020 RETWEET
The three Americans who died fighting an Australian bushfire from the air have been identified by their employer: CŌĆtwitter.com/i/web/status/1ŌĆ”vI
cnni