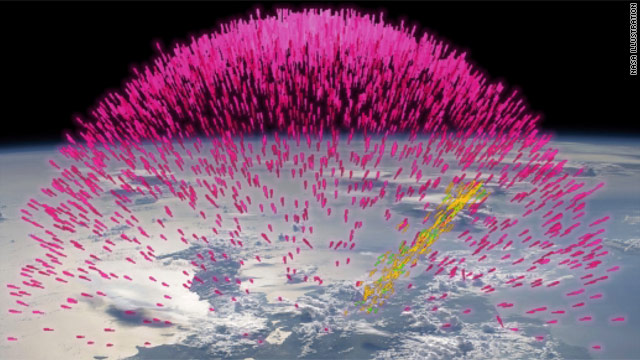 If you find thunderstorms scary, here's one more thing to think about: Scientists say some big boomers create antimatter.

Strong electrical fields near the top of a storm blast electrons upward a NASA article explains. When they're deflected by air molecules, the electrons emit gamma rays, the highest-energy form of light.

Some gamma rays pass near the nuclei of atoms and are transformed into electrons and positrons, or antimatter, and shoot off into space, the article says. When the positrons smack into electrons on the orbiting Fermi, they change back to gamma rays, providing evidence of their existence.

The Alabama team has detected gamma rays with energies of 511,000 electron volts, a signal indicating an electron has met its antimatter counterpart, a positron.

"These signals are the first direct evidence that thunderstorms make antimatter particle beams," said Briggs, who presented the findings this week during the American Astronomical Society meeting in Seattle, Washington.

Why does antimatter matter? Physicists believe that the interaction of matter and antimatter produces pure energy with zero waste - energy that one day could be harnessed and put to use.