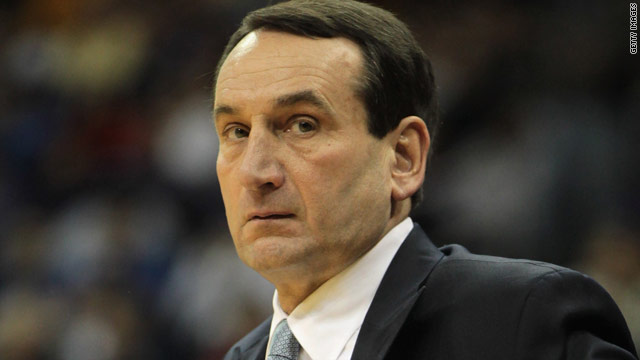 For the first time since March 3, Duke came up short Wednesday night.

Coach Mike Krzyzewski's No. 1 Blue Devils lost 66-61 to unranked Florida State after 25 consecutive wins, 16 of them this season. But, as SI.com's Luke Winn relates, Coach K was not surprised that his team's streak came to an end with point guard Kyrie Irving out of the lineup since early December.

"I've said all along that we're not a great team since Kyrie's injury," Krzyzewski said, "but we've got a chance to be a good team, and we have to learn what this team can do."

Since the star freshman was sidelined with a toe injury, the Blue Devils have looked more and more vulnerable. They may still be the best in the ACC, but tournament time could be another story.

Their matchup with the Seminoles was their first true road test after easy nonconference victories over Kansas State and Oregon.

With Duke's winning streak coming to an end, who should move up the ranks to take the No. 1 spot in the next AP Top 25 poll? The two likely candidates appear to be Ohio State (with wins over Florida and Florida State) or Kansas (with wins over Cal and Michigan).

Up tonight: pro and college hoops. (All times Eastern.)

In the midst of Carmelo Anthony's uncertain future with Denver, the Nuggets will take on a possibly LeBron James-less Heat at the Pepsi Center.

The Boilermakers are looking for their first 5-0 Big Ten start since the 1989-90 season.

5: Number of candidates the Denver Broncos have expressed interest in for their head coaching position.

"In Trump's mind, the reason that people are watching the briefings is because of him. Not because they are scared,ŌĆtwitter.com/i/web/status/1ŌĆ”yf
cnni

3:20 pm ET March 30, 2020 RETWEET
"In Trump's mind, the reason that people are watching the briefings is because of him. Not because they are scared,ŌĆtwitter.com/i/web/status/1ŌĆ”VM
cnni

3:10 pm ET March 30, 2020 RETWEET
US crude plunged 6% and dipped below $20 a barrel Monday as the coronavirus pandemic continues to deal a devastatinŌĆtwitter.com/i/web/status/1ŌĆ”IU
cnni