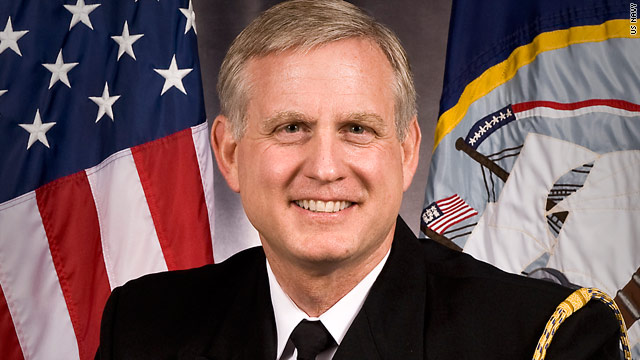 Mewbourne commands the aircraft carrier USS Enterprise as it leaves Norfolk Naval Station, Virginia, on Thursday on a deployment to the Arabian Sea.

Mewbourne took command of the carrier earlier this month after raunchy videos made under the watch of Capt. Owen Honors’ were made public.

The Enterprise is the third carrier Mewbourne has commanded, following the USS Dwight D. Eisenhower and the USS Abraham Lincoln. Before taking command of the Enterprise, Mewbourne was chief of staff of Navy Cyber Forces. He is a native of Ormond Beach, Florida, a 1982 graduate of the U.S. Naval Academy and a naval aviator.

Mewbourne commanded the Eisenhower during two combat tours and said the Enterprise was prepared for its newest mission.

"It is clear Team Enterprise is trained and ready to accomplish the missions that lay ahead. I am honored to be joining such a professional crew and to be a part of the legacy and heritage of Enterprise," Mewbourne said in a Navy release before the deployment.

The Enterprise is the world’s first nuclear-powered aircraft carrier and the Navy’s second-oldest active ship. More than 5,000 sailors and air crew serve aboard the ship.

Gardner, 60, attended Rep. Gabrielle Giffords’ event on Saturday, and the constant pops of a gun being fired took him back to May 4, 1970, when gunshots rang out at Kent State University as students protested the Vietnam War.

“These types of experiences,” he told The New York Times. “You change.”

Gardner, who worked for years as a mental health counselor, told the Times that he ran for his life during the Kent shootings, which took the life of a female from his English class. In 2005, according to the Times, he left Portland, Oregon, and moved to Tucson, Arizona. He was shot in the foot at Saturday’s event.

“I had that feeling of sadness and guilt that, you know, I should have done more, why didn’t I help out more,” he said.  “Everyone wants to have that John Wayne moment, but. ...”

The 30-something Iranian Americans are the hosts of the weekly program "Parazit" on VOA’s Persian News Network. It has drawn comparisons to Jon Stewart's "Daily Show.”

While viewership inside Iran is unknown, the show’s Facebook page has been viewed more than 17 million times in the past month.  Its YouTube channel generates about 45,000 hits a week.

Hosseini and  Arbabi are U.S. citizens who have not returned to Iran. Their frustration with the country, combined with their humor, is what led to the program's creation.

"We used to hang out and just vent," Arbabi told The Washington Post.

What started as a lighthearted show has morphed into quite a phenomenon, tackling some of the most serious issues of the day in Iran.

"There's a lot of sad news," Arbabi told the Post. "We have to walk a fine line. We come from that generation of kids who got up in Iran and protested the government. We share their politics, so we echo their voice."

Hosseni, too, has his reasons for his foray into the field. As someone who grew up in post-revolution Iran, he wants to connect with what he feels residents there want to hear.

"I know the taboos," he said. "I went to school. I worked at newspapers. I was in theater. And honestly I was sick and tired of the lack of transparency of journalism in Iran."