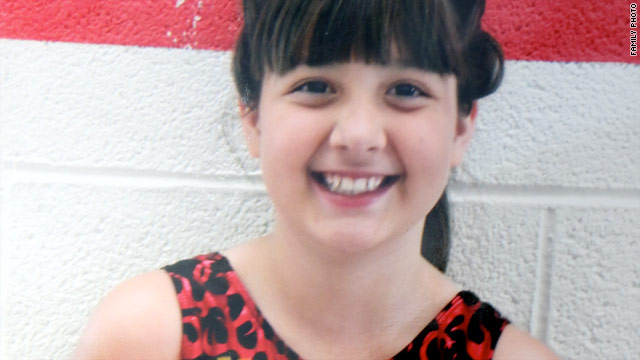 The father of Christina Green, the youngest of six people killed January 8 at U.S. Rep. Gabrielle Giffords' meet-and-greet outside an Arizona supermarket, told CNN Friday that some of his daughter's organs "went to a little girl in Boston."

"It was very poignant to find out. That's what Christina was all about," John Green said. "It's a blessing."

Asked whether he and his wife would like to meet the girl who received the organ one day if she were willing, John Green said, "Oh yes, and I'd give her a big hug."

On Thursday, Christina's family, friends, classmates and hundreds of mourners filled St. Elizabeth Ann Seton Catholic Church in Tucson for a funeral, all of them passing under a giant American flag that was recovered in the aftermath of the terror attacks in New York on September 11, 2001 - the day Christina was born.

Dozens of mourners¬Ýpaid their respects by standing outside the church, which was at capacity.

Representatives from professional baseball also were in attendance. Green was the daughter of a Major League Baseball scout and the granddaughter of former baseball manager Dallas Green.

The girl's father was the only speaker. Before the tearful crowd, he spoke directly to his departed daughter: "Christina-Taylor Green," he began, "I can't tell you how much we all miss you."

Christina, 9, ¬Ýhad recently been elected to the student council at Mesa Verde Elementary School, and a neighbor, impressed with Christina's civic interest, took her to the event to meet Rep. Gabrielle Giffords.

6:01 am ET April 11, 2021 RETWEET
A huge Asian water monitor lizard went into a 7-Eleven in Thailand and climbed a shelf, surprising shoppers‚Ätwitter.com/i/web/status/1‚Ä¶lZ
cnni

2:31 am ET April 11, 2021 RETWEET
In a forecasting study, scientists found that 34% of the area of all Antarctic ice shelves, measuring some half a m‚Ätwitter.com/i/web/status/1‚Ä¶XC
cnni

2:00 am ET April 11, 2021 RETWEET
A growing number of women are entering the world of trucking when demand for drivers is at a critical high. Many of‚Ätwitter.com/i/web/status/1‚Ä¶4S
cnni