Derick Almena, the leaseholder of an Oakland, California, warehouse-turned-art collective that went up in flames in‚Ätwitter.com/i/web/status/1‚Ä¶5j

NBC Sports Network is shutting down at the end of this year, the company said. The cable network will cease operati‚Ätwitter.com/i/web/status/1‚Ä¶iR

Baseball's Hank Aaron is dead at 86. He became a legend in the sport's history by breaking Babe Ruth's record of 71‚Ätwitter.com/i/web/status/1‚Ä¶ue 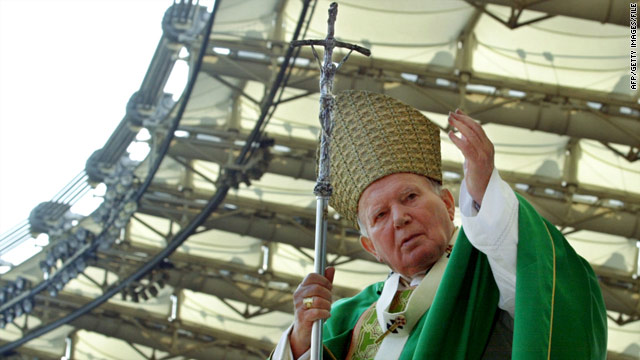 There is some debate as to whether Pope John Paul II's path to possible sainthood has been quicker than others.
January 14th, 2011
08:21 AM ET

Pope John Paul II: Is he on the fast-track to sainthood?

The late Pope John Paul II is one miracle away from sainthood.

CNN's Senior Vatican Correspondent John Allen reports that a beatification ceremony for the late Pope will take place on May 1. This morning, Pope Benedict XVI credited his predecessor with performing a miracle which is the final requirement for beatification. Sainthood, however, would require that he be credited with performing two miracles.

But today's move does not come without controversy. As Allen explains to Kiran Chetry, some Catholics have expressed disapproval that the late Pope seems to be on the fast-track to sainthood.

11:13 pm ET January 22, 2021 RETWEET
Ford is recalling 3 million US and Canadian vehicles with airbags manufactured by the same company whose devices ha‚Ätwitter.com/i/web/status/1‚Ä¶sL
cnni