Disney World plans a phased reopening on July 11 for its Magic Kingdom parks, and on July 15 for EPCOT and HollywooŌĆtwitter.com/i/web/status/1ŌĆ”md

Dr. Anthony Fauci says he thinks a coronavirus vaccine could still be on track for the end of 2020. Follow live updŌĆtwitter.com/i/web/status/1ŌĆ”1k

Bertha becomes the second named tropical system of the year and will make landfall in the Carolinas later today asŌĆtwitter.com/i/web/status/1ŌĆ”Rk 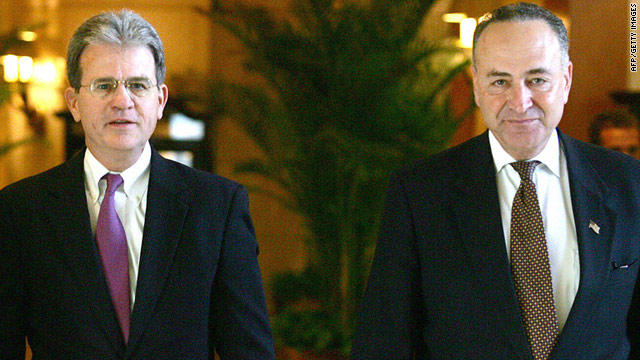 Top senators to sit together at State of the Union address

In a symbolic gesture toward more civil political discourse, Democratic Sen. Charles Schumer and Republican Sen. Tom Coburn said Sunday they will sit together at the upcoming State of the Union address.

Appearing on the NBC's "Meet the Press," Schumer and Coburn called for political debate based on issues and ideology, rather than motives and personal attacks, in the aftermath of the Tucson, Arizona, shootings last week that killed six people and critically injured Democratic Rep. Gabrielle Giffords.

Schumer acknowledged that sitting with Coburn for the president's annual speech to Congress would be symbolic, "but maybe it just sets a tone and everything gets a little bit more civil."

"We believe in discourse in America, we believe in strenuous discourse," said Schumer, who is from New York. "We don't sweep differences under the rug. Tom and I have real differences, but we can do it civilly."

When Disney World begins a phased reopening in July, several measures to prevent the spread of coronavirus will beŌĆtwitter.com/i/web/status/1ŌĆ”AM
cnni

12:15 pm ET May 27, 2020 RETWEET
Japan is injecting another $1 trillion into its economy to protect it from the effects of the coronavirus pandemic. cnn.it/36GJrRF
cnni

12:08 pm ET May 27, 2020 RETWEET
Professional footballer Christian Mbulu has died at the age of 23, according to a statement from his team, MorecambŌĆtwitter.com/i/web/status/1ŌĆ”B3
cnni