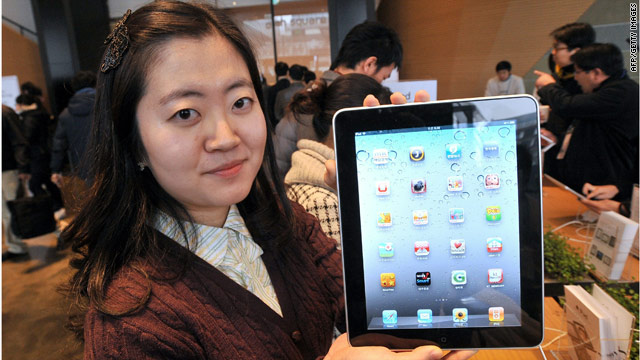 Apple is poised to shatter sales records: Wall Street analysts estimate Apple raked in sales of more than $24 billion during the last quarter, driven by strong iPad demand, and 2011 is full of bright spots. Steve Jobs may be stepping down, but he's leaving the company in great shape. Apple COO Tim Cook will take the reins and everyone is wondering if he can keep the Jobs momentum going.

Senators talk tough on China currency: A bill introduced by U.S. Sen. Chuck Schumer and two other Democrats would impose penalties, including possible tariffs, on nations that manipulate their currencies. "China's currency is like a boot on the throat of America's economic recovery," Schumer said.

5 Chinese trade tricks: Businesses argue that China’s policies are designed to encourage a trade imbalance with the U.S. In 2009, the U.S. had a trade deficit with China of $263 billion - about two-thirds of our total trade deficit that year. And Chinese stocks are under pressure as worries about inflation and asset bubbles gain traction.

National debt: The ugly truth: The federal debt has averaged less than 40% of the total economy. It now represents more than 60% and is likely to hit 100% in a little over a decade. Both Democrats and Republicans are making some serious miscalculations.

Supercomputer 1, Jeopardy champs 0: Watson, IBM's natural-language processing supercomputer, is surprisingly cute and anthropomorphized. "He" appears as a black rectangle with a globe avatar sitting between his future rivals. Watch Watson handily beat two former Jeopardy champs in a practice round.