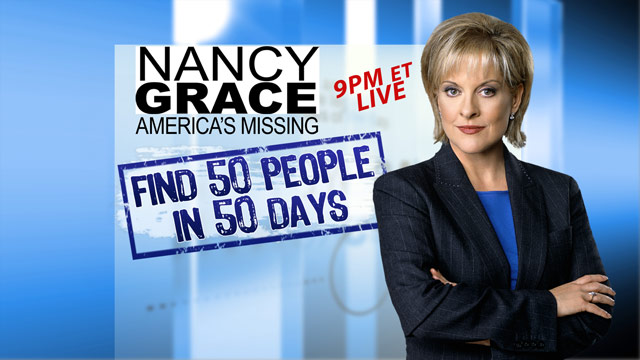 Nancy is dedicated to finding missing persons in the United States.  The program, which relies heavily upon audience participation, urges viewers to find people as well as bring attention to victims whose stories never made it to the airwaves.

Nancy and her team are utilizing social media, CNN iReport, phone lines and their show to achieve the goal of finding 50 people in 50 days.

Tonight’s debut program will feature the case of  Lindsey Baum, a 10-year-old girl from Washington state who went missing in 2009 as she walked home from a friend’s house.

CNN spoke to Nancy just prior to the show’s live premiere.

CNN: What inspired you to focus your show solely on missing persons?

Nancy Grace: Well, you’re in the news business just like us - although I don’t really think of myself that way, I think of myself more as a prosecutor - and our news cycle chews somebody and spits them out every 24 hours. And I get it. I’m not trashing that because there’s more news to report that people want to know, need to know and should know.

I understand that you can’t stay with a case forever. You’ve got to pick up and move on to the next group of people that need your help. But this is a real chance to go back and pick up those pieces and put them back together again.

When I was prosecuting, I got the satisfaction of being called in on a crime scene, helping to analyze and process the scene, investigate it, take it to the grand jury… after conviction, take it myself to an appeals court and argue it. I could see the end. I would take the case to fruition.

We don’t get to do that. We cover cases as long as there’s news, and when there’s not news anymore, we move on to cases that have news, more people that need to be found. Many of them stick in my mind and in my heart; and my EP [Executive Producer], Dean Sicoli, same way. And my staff, same way. We saw this as an opportunity to try and go back and look at the cases that remain unsolved and try again.

CNN: Does each installment of "America's Missing" focus on one missing person?

CNN: Are you featuring both missing children and adults, male and female?

Grace: Oh yes. We’re across the board.

CNN: Did the missing persons have to have gone missing recently, or is there no timeframe?

Grace: Absolutely no timeframe. In fact, tonight we may lead off with the case of a female child who’s just gone missing and then go into the main story that we’re covering just so we can get it out there.

CNN: Do you think the show's "beat the clock" sort of mentality will stir up a sense of urgency regarding cases that otherwise may have gone forgotten?

Grace: We hope so. That’s our goal.

CNN: If someone has a loved one who is missing, what can they do to get their story out there?

Grace: They can contact us. That’s actually how we found out about many of these cases. Just e-mail me or call the show [1-877-NANCY-01]. If people have cases, or know of cases, that no one’s covering - we’ll cover them.

CNN: What would you say to someone with a missing friend or family member who has lost all hope of finding their loved one either because too much time has passed or due to grim statistics?

Grace: I always use examples; for instance, Elizabeth Smart. Also, in a case that we covered recently, a little girl got taken along the eastern seaboard but a viewer saw her in California with her abductor who was panhandling in front of a 7-11. A woman called in and sure enough it was her [the missing girl]. She was found alive! It does happen!

And I would also tell anyone: Don’t just rely on law enforcement. They’re just as overloaded as everybody else in this world. They’re just as swamped. You get out there, you make the difference.

And, frankly, what’s more important than that is what you do up front when it comes to letting your children play outside or letting your children play unsupervised. Avoid a missing child incident before it happens. For instance, we did the HLN digital fingerprinting. Have information on file and ready for police if they need it. To this day, in my own neighborhood, I see children walking around from one place to the next by themselves. That’s not okay. Also, be careful at pick-ups and drop-off locations at school and after school activities.

Of course there’s always the aberration. Remember the Erin Runnion case? Her daughter, [5-year-old] Samantha Runnion, was right there in the front yard with the grandmother inside looking out the window and she got taken out of the front yard. It does happen, but a lot of this is avoidable. There are ways to protect, and that’s the message I want to get out.