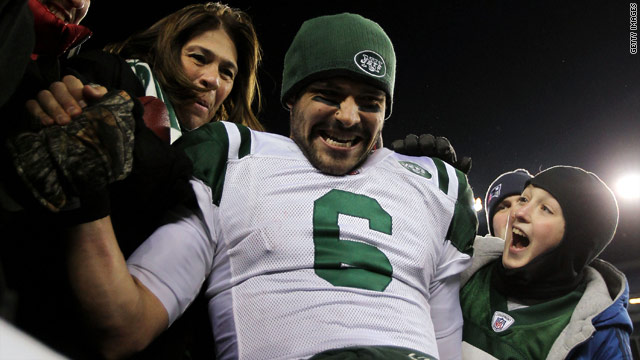 After season of trash talk and seemingly outlandish Super Bowl promises, the Jets served up one of the most stunning performances this playoff season with a surprising 28-21 victory against top-seeded New England. The Gang Green gave their brash, often rowdy, demeanor newfound credibility during a game that saw sophomore quarterback Mark Sanchez throw three touchdown passes and star Patriots QB Tom Brady get sacked five times. After a humiliating 45-3 loss against the Patriots less than two months ago, the Jets roared back, making their way into their second-straight AFC Championship matchup, this time against the Pittsburgh Steelers.

The Gang Green may have racked up their fair share of enemies, as verbal jabs flew between the Pats and Jets, but they backed up their words with actions that took the Patriots completely by surprise. SI.com’s Don Banks explains that on Sunday, Rex Ryan and the Jets were on a mission to prove that they weren’t in the business of making empty promises.

"We talk because we believe in ourselves," said Ryan. “That's where the talk came from. There is a huge amount of respect that our team has for New England. But we aren't afraid of anybody. We're not in fear of anybody. We came here on a mission. We're trying to win a Super Bowl."

But more than the confidence that the team reaped from Ryan, the Jets were also given a defensive strategy, befitting the big game they were verbally serving up. Ryan’s defensive plan simply proved too much for Brady and the Patriots to handle, as Banks explains: “Mixing their coverages and getting good solid pressure mostly without blitzing, the Jets had Brady looking uncomfortable and hesitant on most pass plays, with none of the crisp offensive rhythm that New England had during its awe-inspiring eight-game winning streak.”

While the Jets may still be basking in the glory of their unbelievable win, will they have what it takes to outmatch the Steelers? If Ryan can keep up the trash talk and his players can live up to it, they may actually have a shot.

Oklahoma City Thunder vs. Los Angeles Lakers (10:30 p.m., ET) – The Thunder will go for their fifth-straight victory against playoff foe the Lakers.

Syracuse vs. Pittsburgh (7:30 p.m., ET) – No.4 Syracuse and No. 5 Pittsburgh will battle it out at the Petersen Center tonight.

13 – Number of wins boxer Manny Pacquiao has recorded since the start of his career. He will be chasing his 14th victory and ninth knockout when he fights five-time champ Shane Mosley on May 7.

68 – Place that cyclist Lance Armstrong finished in his last professional event outside the United States.