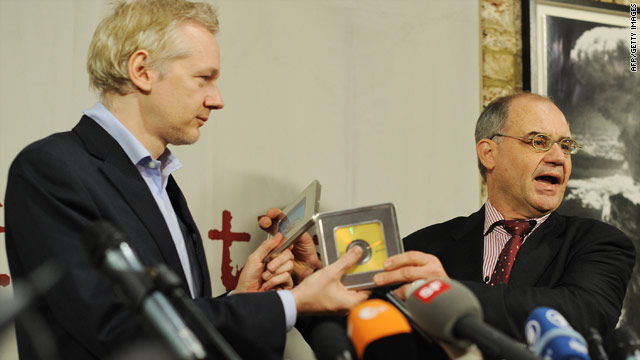 On Monday in London, a former Swiss bank executive gave WikiLeaks founder Julian Assange two discs with the names of prominent individuals and companies the executive says are involved in tax evasion and other crimes.

Rudolf Elmer would not say where he obtained the information or which banks were involved. TheÂ discs outline wrongdoing by several dozen politicians and "pillars of society," he said.Â His motivation?Â He wants to "educate our society," he said. "I know how the system works. ... It's damaging."

Elmer was fired in 2002 from the Julius Baer Group. He ran the bank's Cayman Islands office for eight years. On Wednesday, he will go to trial in Switzerland on charges that he stole bank information. Elmer was reportedly held for a month in 2005, accused of falsifying documents and threatening people at the bank, among other allegations.

Julius Baer released this statement about Elmer: "After his demands (including financial compensation) in connection with the dismissal could not be satisfied, Mr Elmer embarked in 2004 on a personal intimidation campaign and vendetta against Julius Baer. The aim of his activities was and is to discredit Julius Baer as well as clients in the eyes of the public."

In addition to Elmer, Assange is also facing charges. Assange's sex crime investigation continues to play out in Sweden as he remains out of jail on bail. Assange is due in court in London in early February.

"Saturday Night Live" player Beck Bennett announced his departure from the show on Monday, leaving behind his impreâ€twitter.com/i/web/status/1â€¦Gc
cnni

11:31 pm ET September 27, 2021 RETWEET
Instagram is pressing pause on plans to develop a version of its service for kids under 13 after facing pressure frâ€twitter.com/i/web/status/1â€¦vH
cnni

11:20 pm ET September 27, 2021 RETWEET
Scientists have confirmed the discovery of a nearly complete fossil of a 25-million-year-old eagle that once flew oâ€twitter.com/i/web/status/1â€¦zR
cnni