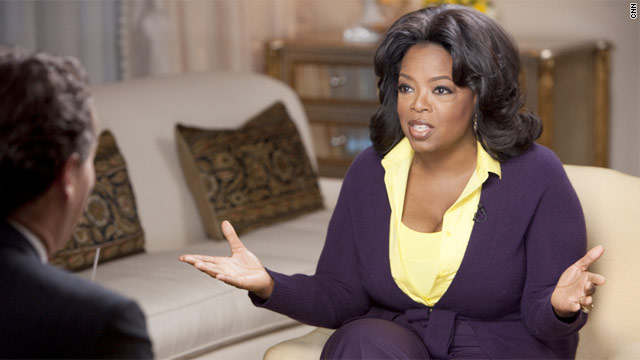 Winfrey: Losing baby as a teen was 'my second chance'

In the inaugural interview on "Piers Morgan Tonight," talk show queen Oprah Winfrey recalled contemplating suicide at 14 because she was pregnant, and how she feels she was given a second chance when she lost the baby.

"I thought, 'Before the baby was born, I’m going to have to kill myself,' " she told Piers Morgan during the interview, which aired on CNN Monday night, citing the stigma of being an unwed mother at the time, and her father's view of unwed mothers.

Her mother in Milwaukee sent her to live with her father in Nashville, and he didn't know she was pregnant.

"My father ... said to me as I'm standing in the kitchen listening to him, 'These are the rules of the house, you're going to obey the rules, you have a 10 o'clock curfew, and I would rather see a daughter of mine floating down the Cumberland River … than to bring shame on this family and the indecency of an illegitimate child.' "

She said she didn't come close to killing herself - "I did stupid things like drinking detergent and all that kind of crazy stuff that you do when you’re trying to get attention when you’re really just trying to cry for help," she said.

"But this is my 14-year-old self. I don't even know what I thought the plan was going to be. ... You're having a baby out of wedlock, your life is over. So when the baby died – the baby was never brought home from the hospital – when the baby died, I knew that it was my second chance.

She discussed the baby and the suicidal thoughts after being asked whether any part of her wondered what would have happened if the child had lived.

Winfrey also discussed how her heart was broken twice, why she is not one for marriage, what she intends for her fortune when she's gone, and how she wishes everyone would have a Gayle King in their life.