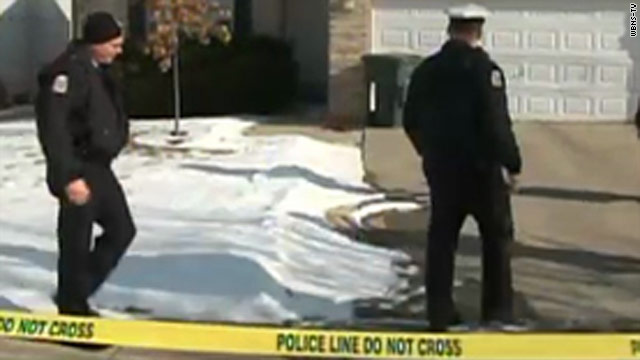 Police in Columbus, Ohio, investigate the discovery of a bloodied, naked man in a garden shed Monday.
January 18th, 2011
11:22 AM ET

Police in Columbus, Ohio, are trying to identify and retrace the final hours of a naked, bloody man found dead in a backyard garden shed.

Someone had knocked on neighbor Dennis Hoover's door at midnight, but Hoover refused to open the door because he couldn't see the man, he told CNN affiliate WBNS-TV.

Hoover called 911 but police could not find anyone, the station reported. Bloody handprints were visible on Hoover's door in the morning.

After daylight, Hoover followed footprints in the snow into a neighbor's yard, where he discovered the bloodied body in the shed.

"He was covered (in blood). It looked like he went through a briar patch," Hoover told WBNS. "Just scratched all up."

Investigators were hoping an autopsy would tell them who the man was and how he was injured.