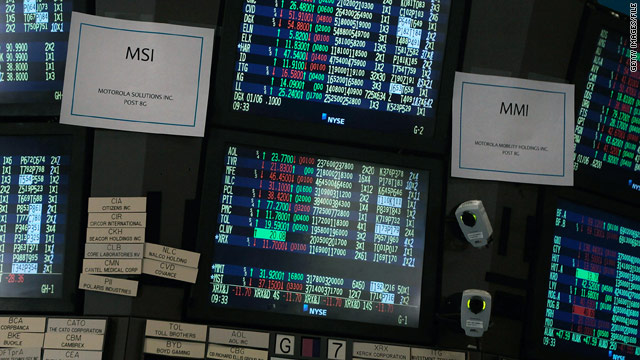 Some highlights of today's business news:

The gains came despite disappointing earnings from Citigroup, which dragged the banking sector lower. Citi tumbled over 6%, while Bank of America and Wells Fargo also took a hit.

Apple shares fell over 2% in during market hours Tuesday amid worries about CEO Steve Jobs' medical leave.
But after the market closed, Apple reported a record jump in quarterly earnings and sales, driven by strong demand for Macs, iPhones and iPads during the holiday season.

The United States dug deeper into debt with its foreign creditors in November, according to government records released Tuesday.

Treasuries are traditionally perceived to be low risk because they're backed by the U.S. government. The latest data signals that their safe-haven reputation has not deteriorated among the international investing community,
despite the country's growing budget deficit.

The Federal Communications Commission and the Department of Justice on Tuesday approved - with several conditions - a merger of the country's largest cable operator, Comcast, and broadcasting company NBC Universal.

The FCC said the Comcast-NBC Universal combination will be required to take steps to increase competition in the video marketplace. In addition, Comcast has committed to expanding local news coverage, expand programs for Spanish-speaking viewers and offer Internet access to schools and libraries.

The death of a 17-year-old boy has touched on a number of broader issues that resonate deeply across China: the lacâ€twitter.com/i/web/status/1â€¦my
cnni

4:50 am ET May 14, 2021 RETWEET
Madame Tussauds in London has revealed that Prince Harry and Meghan Markle's waxworks are -- like their real-life câ€twitter.com/i/web/status/1â€¦7r
cnni

4:37 am ET May 14, 2021 RETWEET
"The CDC's decision immediately raised a flurry of questions and consequences, including a debate over whether an aâ€twitter.com/i/web/status/1â€¦lE
cnni

4:00 am ET May 14, 2021 RETWEET
As US pulls out of Afghanistan, China sees opportunities -- and potential for chaos | Analysis by @jgriffiths &â€twitter.com/i/web/status/1â€¦6G
cnni