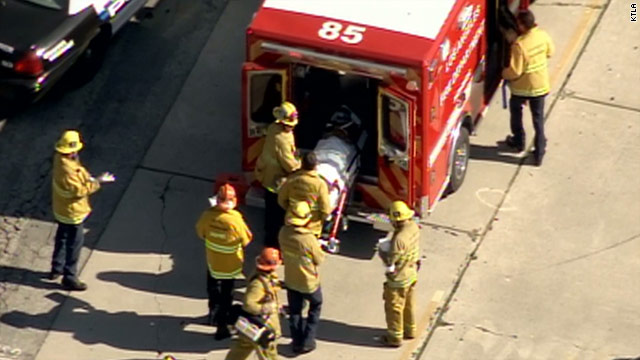 Police said two teens were taken to a hospital, including a girl who was in critical condition with a gunshot wound to the head.
January 18th, 2011
03:24 PM ET

[Updated at 4:05 p.m.] A suspect in an apparently accidental shooting at
Gardena High School in California has been caught and handcuffed by police, according to footage aired by CNN affiliate KTLA shortly before noon PT.

"The student in custody was the student involved in this morning's shooting," Robert Alaniz, a spokesman for the Los Angeles Unified School District, told CNN affiliate KCAL/KCBS.

Los Angeles Police Deputy Chief Patrick Gannon told reporters that the shooting appeared to be accidental. A student brought the gun to school in a backpack, and when the student set the backpack on a desk the gun discharged, wounding two students, he said.

7:28 am ET April 9, 2020 RETWEET
New Zealand reported a decline in new coronavirus cases for the fourth consecutive day. For other countries, thosâ€twitter.com/i/web/status/1â€¦m0
cnni

7:16 am ET April 9, 2020 RETWEET
Italian Prime Minister Giuseppe Conte has called on the European Union to loosen its budget rules, warning that a fâ€twitter.com/i/web/status/1â€¦8Z
cnni