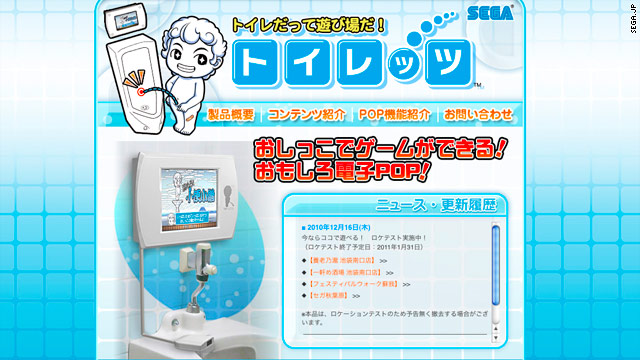 Sega Toylet: Become a video game whiz - at the urinal

Sega’s latest video game is in the toilet, but that doesn’t mean it will tank.

The Japanese company is testing Toylets – video games for urinals – at four locations in Tokyo, according to news reports, including one from Japan’s Akihabara News.

Wanna play? It’s probably best to fill up on beverages first, because the best scores come from the strongest streams. A pressure plate in the urinal measures what you’ve got.

Then choose one of four games on video screens mounted above the urinals.

There’s the “Graffiti Eraser”: The stronger the stream, the more cyberwalls you can clean up.

Or try “Milk From Nose.” This is a multiplayer game. Your stream is measured against those of previous users and translated into milk blown from a character’s nose. The strongest nose-blowers pushes the opponent out of a ring, and we have a winner. Your opponent need not be present to play.

Another game equates stream strength with a gust of wind blowing the dress off a girl.

It’s not all fun and games. You get to watch advertising while you go, er, compete.

Wired UK reports that the testing phase will last through the end of the month. Drink up!