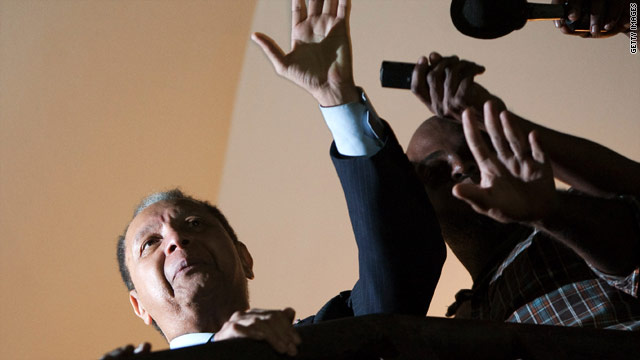 Jean-Claude Duvalier waives to a crowd from the balcony of the Karibe Hotel.
January 18th, 2011
11:40 AM ET

Former Haitian dictator Jean-Claude "Baby Doc" Duvalier was taken into custody Tuesday and transported to a courthouse where a hearing will determine whether he will be arrested.

Duvalier appeared from the hotel room where he has been holed up since his mysterious return to Haiti on Sunday. His hands free of handcuffs, he waived to a small crowd of supporters before heavily armed police escorted him away.

Duvalier's departure from the Karibe Hotel came after a morning of intense legal activity. A judge and chief prosecutor had entered the hotel to question Duvalier.