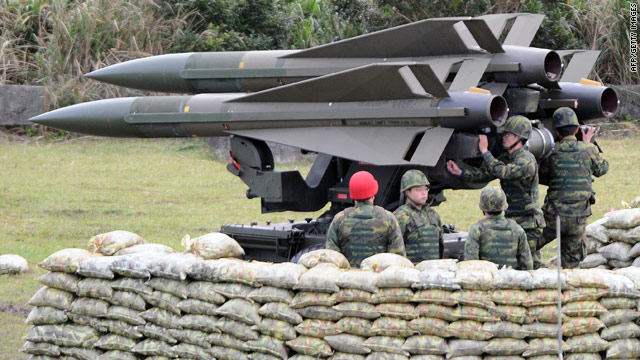 The timing is odd, for sure, but Taiwan’s president says Tuesday's missile test had nothing to do with Chinese President Hu Jintao’s visit to Washington.

The Taipei Times reported that President Ma Ying-jeou was not exactly pleased with the test results. Of the 19 missiles fired, some of which were U.S.-made, six encountered technical difficulties.

One, an American AIM-7 Sparrow, ascended 200 yards “before radically changing direction and plummeting into the South China Sea,” the Times reported. Four others failed to detonate.

“I’m not satisfied with the results,” Ma said. “I hope the military will determine the reasons and improve its training.”

The paper said that 576 members of the armed forces participated in the drills.

Several media outlets pointed out the noteworthy timing of the test, which came on the day Hu left for the United States.

It also came a week after China tested its J-20 fighter jet, which is said to have stealth technology, and as Taipei is reiterating its desire to purchase new F-16 fighter jets from the United States, Voice of America reported.

Taiwan has governed itself since 1949, but Beijing still considers the region part of its territory. Though Ma has tried to improve ties with China – primarily in the economic arena – many Taiwanese are opposed to improving relations.

Andrew Yang, Taiwan’s deputy defense secretary, told the BBC that China has never ruled out the use of force in achieving reunification.

“We consider this a direct threat against us, so we need to consolidate our armed forces,” he told the station.

This is where the messages coming out of Taipei seem mixed.

While Yang told the BBC that the missile drills were intended to remind the U.S. that Taiwan needed help defending itself, Ma said the test had “nothing whatsoever” to do with China, according to the Taipei Times.

He further said the date for the exercise, the first of two this year, had been set before Hu announced his trip to the U.S. and before the J-20 test flight.