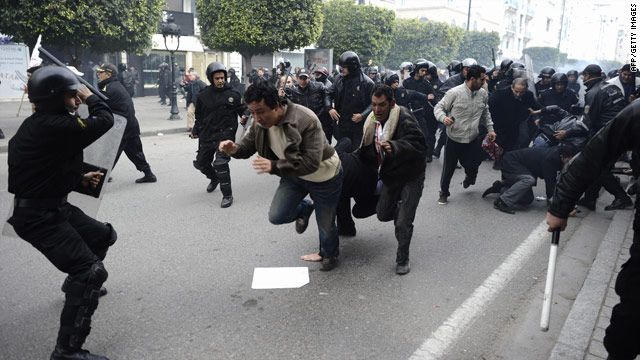 Police clash with demonstrators at a small protest rally in Tunisia.
January 18th, 2011
10:15 AM ET

As many as 1,000 protesters took to the streets in the Tunisian capital Tuesday, calling the country's new unity government a sham and demanding that more should be done to sweep the old guard out of power.

When peaceful gatherings started to grow in size, witnesses said, police would step in and start firing tear gas and chase protesters with their batons. There were at least a half dozen people beaten up, eyewitnesses said, and one man's arm was broken.

9:00 pm ET October 22, 2021 RETWEET
Asked whether he would entertain the notion of getting rid of the filibuster for voting rights legislation, Presideâ€twitter.com/i/web/status/1â€¦Eq
sarasidnerCNN