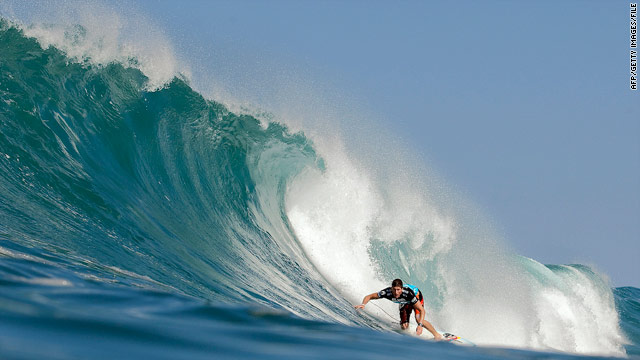 A select group of the world's best surfers was gathering in Hawaii Wednesday in hopes waves on Oahu's North Shore would grow big enough for an elite tournament.

The Quicksilver in Memory of Eddie Aikau is held only when wave heights tower over 20 feet between December 1 and February 28. It has been completed only seven times in its 26-year history, the last time being December 9, 2009.

"We might go, we might not, but we will always be ready for when the bay calls the day," contest organizer George Downing said. "We will do exactly what Eddie and big wave riders have always done through the years - watch the swell developments, be ready, and wake up to see what the day delivers."

Among those invited to surf the "Eddie" this year are Hawaii's Bruce Irons, who won the event in 2004, Floridian Kelly Slater, a 10-time world surfing champion who won the 2002 Eddie, and Californian Greg Long, the defending champion.

"The Eddie is the most prestigious contest you can win in the surfing world, besides the world title," he told The Star Advertiser in Honolulu. "Once your name is on the list of past winners, it's set in stone and will live forever."

Australian surfer Tom Carroll, a two-time world champion who broke his leg practicing for the 2009 contest, left for Hawaii on Wednesday. "I'm very excited about the event, but I have a fear I have never felt before," he told the Manly Daily.

The event honors Aikau, the first lifeguard at Waimea Bay on the North Shore. He surfed hours upon end at the beach and later won surfing titles. He lost his life in 1978 while part of a crew trying sail the traditional Hawaiian voyaging canoe Hokulea from Hawaii to Tahiti using only celestial navigation. When the vessel capsized a short way into the trip, Aikau tried to paddle to the island of Lanai, 19 miles from where the Hokulea capsized, to get help. Rescuers later spotted the canoe, but Aikau was never seen again.