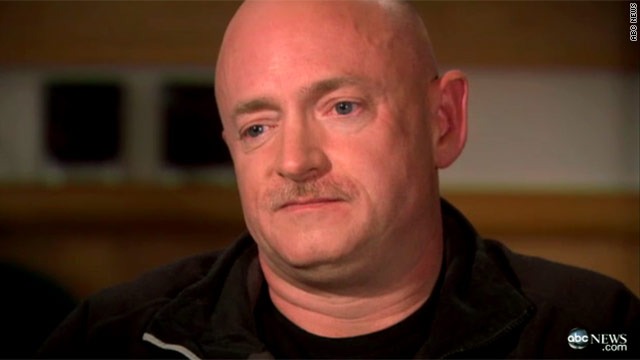 For 20 awful minutes, Giffords' husband thought she had been killed

Mark Kelly went into the bathroom and broke down.

He had just heard erroneous news reports that his wife, Gabrielle Giffords, had died after being shot in the head at a political event outside a Tucson, Arizona, grocery store that day, January 8. His daughters cried and his mother nearly screamed, he recalled.  "To hear that she died is just, it's devastating to me," Kelly told Diane Sawyer in an interview broadcast Tuesday night on ABC.

Then, wracked with grief, Kelly said he called his wife's chief of staff, who told him that the reports couldn't be true, that Giffords' mother was with her. Giffords was alive, the chief of staff reassured him.

Kelly, an astronaut, recalled the harrowing 10 days after the shooting rampage and his anguish about the people who died, including a 9-year-old girl, a federal judge, and one of his wife's staffers. He also spoke about his romance with the congresswoman, their early dating days, and what makes him believe she will pull through.

Kelly hasn't left his wife's side. He holds her hand and falls asleep next to her every night. "I do talk to her, I tell her how long she's been here (in the hospital)," he said. "I tell her I love her."

Giffords has not only stunned the world by surviving a bullet to the brain - only 10% of people with that injury live - but her recovery has been marked with inspiring and emotional moments. Her husband believes she recognizes him. Giffords plays with his wedding ring, Kelly said. She'll move it up and down his finger, take it off and put it on her own finger, sometimes moving it to her thumb. The other day, he said, she was tired, so she took it off his hand, and handed it back to him. Another day, Kelly said, his wife even reached up to give him a neck massage for 10 minutes.

There is an inscription that he put in her ring before they married in 2007: "You're the closest to heaven that I've ever been."

Read the Times' 2007 account of their wedding and CNN.com's reflection on the event, including the memorable brief rain that happened during the ceremony.

Giffords will reportedly be moved on Friday to a rehabilitation facility to be treated by surgeons who specialize in patients with bullet wounds to the brain, according to an e-mail from her family.