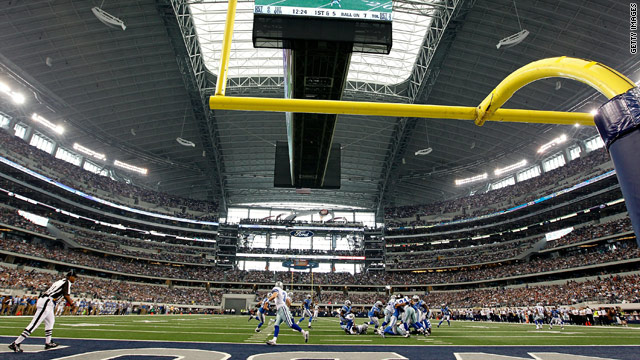 Cowboys Stadium might have a shot at setting an attendance record for a Super Bowl next month, thanks in part to the NFL's decision to count thousands of outside-the-stadium tickets.

The Dallas Cowboys have said they will sell $200 tickets - offered first to Cowboys club-seat season-ticket holders - to a plaza outside the stadium for the February 6 game. People with those tickets will watch the game on video screens but won't be able to enter the stadium.

"Several thousand" tickets to the plaza will be available, and those tickets will count toward the gameâ€™s attendance, Brian McCarthy, the NFL's vice president of corporate communications, told CNN Wednesday.

That might allow the Texas stadium to break the Super Bowl attendance record, set in 1980 at California's Rose Bowl with an attendance of nearly 104,000.

The stadium, which opened in 2009 and normally has a football capacity of 80,000, has an expanded capacity of about 100,000 and already holds the single-game NFL attendance record, set in 2009 with a crowd of 105,121, according to CNN affiliate WFAA. But that record included not only expanded seating, but also people packed in standing-room-only areas.

The NFL, which is in control of the seating arrangements for the Super Bowl, is putting temporary bleachers in some of those standing-room areas, so the stadium presumably wonâ€™t be quite as packed. In October, Frank Supovitz, the NFLâ€™s vice president of special events, told The Dallas Morning News that he didnâ€™t expect the stadium to hold more than 100,000 for the Super Bowl.

"It wonâ€™t break the record," Supovitz said in October, according to the newspaper.

On Wednesday, McCarthy said he wouldn't know how many people the stadium will hold until the league has finished building auxiliary seating for the media, finalized camera positions and completed security details.

But if several thousand outside tickets are being counted toward the total, the record would appear to be within reach.

Tickets for inside the stadiumÂ - generally available only through a random drawing conducted by the league months before the game - are reselling at thousands of dollars each. The cheapest ticket on the NFL's official ticket exchange website Wednesday night was $3,410. On StubHub, the cheapest was $2,840.

In the years leading up to George Floyd's death, about two-thirds of the people placed in neck restraints by Minneaâ€twitter.com/i/web/status/1â€¦YQ
cnni

4:57 am ET June 2, 2020 RETWEET
While tensions between police and demonstrators have heated up across the US, some officers have shown solidarity wâ€twitter.com/i/web/status/1â€¦9T
cnni

4:52 am ET June 2, 2020 RETWEET
A Twitter account that tweeted a call to violence and claimed to be representing the position of "Antifa" was in faâ€twitter.com/i/web/status/1â€¦jo
cnni

4:42 am ET June 2, 2020 RETWEET
"All are conscious and breathing. Their injuries are believed to be non-life threatening." At least four officersâ€twitter.com/i/web/status/1â€¦5P
cnni

4:31 am ET June 2, 2020 RETWEET
Protests erupted for a seventh day across the US over the death of George Floyd. Ahead of a speech by President Doâ€twitter.com/i/web/status/1â€¦QU
cnni