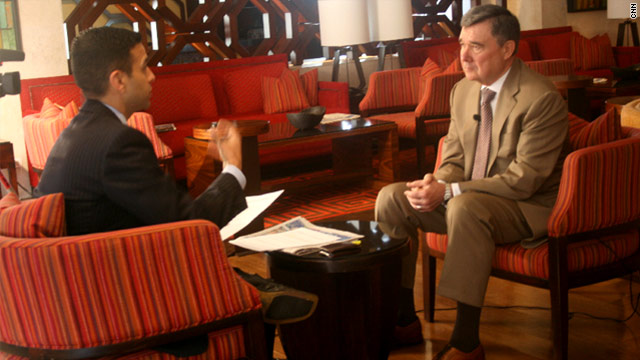 10 questions for the U.S. drug czar

Gil Kerlikowske, Director of the White House’s National Office of Drug Control Policy, concluded Thursday a three-day visit to Colombia to assess the progress the South American country has made in its fight against drug trafficking and Marxist guerrillas. Under an agreement known as “Plan Colombia,” the United States has provided the country with more than seven billion dollars in aid in the last ten years.

CNN’s Rafael Romo sat down with Kerlikowske in the capital city of Bogota to talk about the United States’ role in tackling drug trafficking in Latin America.

Romo: Has Plan Colombia been worth it?

Kerlikowske: I think that the reduction in violence is very significant and is well noted by the citizens. I mean, [Colombia] is now a very viable country.

Q: Michael Shifter from the Inter-American Dialogue says that Plan Colombia has failed in reducing the production of drugs. Is that the case?

A: Cocaine consumption is down dramatically in the United States.  We have less of an appetite for cocaine. We use cocaine at far lower levels, particularly over the last four years. What we have seen is an increase in cocaine consumption in Europe.

Q: Are you really satisfied that the Colombian government is doing the best they can with the funding provided from the United States and that they’re not just telling you what you want to hear?

A: All my meetings with government officials here is clear that they’re doing everything possible to improve.

Q: What did Colombian President Juan Manuel Santos tell you about the future of the binational relationship?

A: He knows all of the issues.  He recognizes the importance of the relationship. I think he also clearly understands the changing nature of drug trafficking, which is so much more international, less focused on a particular country.

Q: Colombian National Security Advisor Sergio Jaramillo told me that they’re increasingly focusing on prevention as opposed to just law enforcement. Is that your perception as well?

A: That was my clear take away and I think it’s a perfect transition to sustainability of safety and security and responsibility for more local control and I think it makes great sense.

Q: A cartoon published in the Colombian daily El Tiempo shows the United States as a tall Uncle Sam calling the shots while a short Colombian farmer is obediently waiting to take orders. Is it an accurate reflection of reality?

A: I really see this as an equal partnership. This is about working together and cooperating. If we’re not all in this together we’re not going to be very successful. And it isn’t about one country telling the other what to do.

Q: Can the lessons learned in Colombia be replicated in Mexico?

A: It’s important to realize that Colombia’s success didn’t happen overnight. What isn’t getting reported in Mexico is the number of successes they’ve had. There’s been some decimation of some of the cartels, a number of what they call “the high value targets,” those most sought-after have been arrested or have died in the attempt to be arrested.

Q: Still there have been 30,000 drug-related deaths in Mexico in the last four years.

A: It’s important for us to do everything possible to support President [Felipe] Calderon as he takes this on. Mexico is one of our largest trading partners. We share almost 2,000 miles of border and if ever there was a need for true partnership Mexico is it.

Q: Is this the right moment for a Plan Mexico just like it was for Colombia ten years ago?

A: There is [the] Merida [Initiative] and the [Obama] administration is working on the shifts for the next wave of what will happen with Merida.  It’s also important not to take our eye off the ball.  Merida is not just a Plan Mexico; it is about Central America as well.

Q: But funds allocated to the Merida Initiative pale in comparison to Plan Colombia.

A: What doesn’t get captured in the budget numbers is the ability to have training and technology and assistance, changes in the judicial system, law enforcement cooperation.  Those are probably as important as just how much money is put in each place.