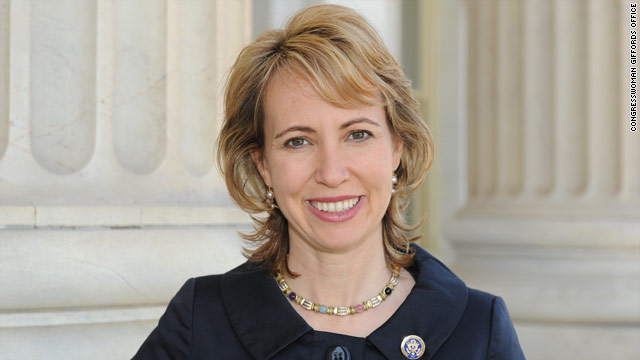 Giffords, 40, was one of 19 people shot January 8 at a political event outside a Tucson grocery store. Six of the 19 died; Giffords is the only victim still hospitalized.
January 20th, 2011
07:42 PM ET

Giffords to be flown to Houston rehabilitation hospital Friday

Accompanied by a veterans' motorcycle escort, Arizona U.S. Rep Gabrielle Giffords will be taken Friday from a Tucson hospital to a nearby Air Force base for a flight to Texas and the beginning of her extended recovery, according to the congresswoman's office.

Giffords, thus far, has made a remarkable recovery after being shot through the brain in a January 8 assassination attempt in Tucson, but doctors said she will require further rehabilitation.

According to her office, Giffords will leave Tucson's University Medical Center around 9:15 a.m. She will be taken in an ambulance to nearby Davis-Monthan Air Force Base for the flight to Houston.

The congresswoman rode with Veterans of Foreign Wars riders in May 2009, when they escorted the remains of Civil War-era veterans from Tucson to Sierra Vista. VFW riders will accompany her ambulance on Friday.

The Air Force will transport Giffords on a Challenger aircraft to Houston's William P. Hobby Airport, arriving around 1:15 p.m, the office said. A helicopter will take her to TIRR Memorial Hermann, a rehabilitation hospital.

Accompanying Giffords on the flight from Tucson will be:

Kelly on Thursday said Giffords' family looked at several different rehabilitation facilities and liked TIRR Memorial Hermann, part of the Texas Medical Center, for several reasons. Among them: The medical team there specializes in penetrating head injuries like the one Giffords has suffered, and it is relatively close to Tucson.

Two police officers in the Philippines were killed in a shootout with other federal agents during a botched underco‚Ätwitter.com/i/web/status/1‚Ä¶UZ
cnni