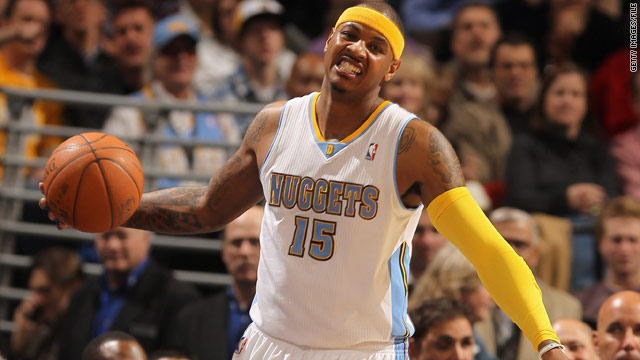 Looks like Carmelo Anthony will be sticking around Denver, at least a little longer.

After weeks of speculation and coming close to a 14-player, multimillion dollar deal between the Nets, Nuggets and Pistons, Nets team owner Mikhail Prokhorov announced that he was ending trade discussions.

"I am not happy with the way this deal has gone until now,ŌĆØ he said during a press conference Wednesday evening. ŌĆ£It has taken too long. It has been played out in public. The uncertainty has taken a toll on the players. I believe that has cost us several games. I think the management of the team did a great job but there comes a time when the price is simply too expensive. I'm instructing our team to walk away from the deal and the meeting which was supposed to be held by our management tomorrow in Denver with Carmelo is hereby cancelled."

"The decision to walk away is my own decision. I'm not day-to-day with the team. Being one step removed from the day-to-day business gives me a clear understanding, a clear view of what was needed to be done."

But was ProkhorovŌĆÖs decision to put the kibosh on the trade, a more calculated move than just putting an end to the drama? SI.comŌĆÖs Chris Mannix thinks so. With rumors circulating that Anthony wasnŌĆÖt interested in heading to New Jersey, ProkhorovŌĆÖs announcement could have been a ploy to simply save face for his team. But according to officials who were aware of his impending bombshell, Prokhorov has had enough of the Nets-Carmelo madness and took swift action to bring it to a close.

So where does that leave ŌĆśMelo? Free to make his way to the New York Knicks, thatŌĆÖs for sure. With the Knicks reportedly being AnthonyŌĆÖs top choice, they have become the frontrunners in the Carmelo trade saga. But both teams still have plenty details to hammer out before a trade is on the table.

93,000 ŌĆō Approximate number of fans who will be admitted into Cowboys Stadium for the Super Bowl.

27 ŌĆō Number of consecutive double-doubles that Blake Griffin amassed before his streak ended Wednesday night against the Timberwolves.

The US sues Texas Gov. Greg Abbott over his executive order targeting the transport of migrants recently released fŌĆtwitter.com/i/web/status/1ŌĆ”zx
cnni

7:13 pm ET July 30, 2021 RETWEET
Disney is requiring all its salaried and non-union hourly employees in the US to be vaccinated. Walmart said all iŌĆtwitter.com/i/web/status/1ŌĆ”Dh
cnni

6:24 pm ET July 30, 2021 RETWEET
Disney and Walmart, two of America's largest employers, have announced that they are requiring employees to be vaccŌĆtwitter.com/i/web/status/1ŌĆ”qO
cnni