The White House released the 2020 tax returns for both President Biden and Vice President Harris, restoring a tradiâ€twitter.com/i/web/status/1â€¦Pd

The NYRA has temporarily suspended trainer Bob Baffert from entering any horses in races at the track that is hostâ€twitter.com/i/web/status/1â€¦zr

RT @CNNBusiness: The president of the country's largest nurses' union has spoken out against updated federal guidance which says that â€” witâ€¦

Working more than 55 hours a week is killing hundreds of thousands of people a year through stroke and heart diseasâ€twitter.com/i/web/status/1â€¦Ct

The US announces more sanctions against Myanmar's military government, key figures in the military regime and someâ€twitter.com/i/web/status/1â€¦dW 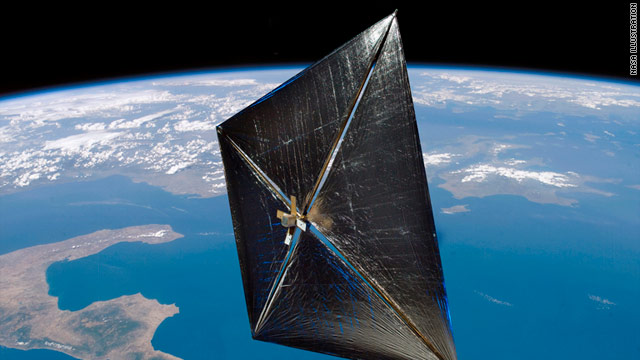 The NanoSail-D's doors are supposed to open like blades on a ceiling fan, allowing a large polymer sail to pop out.
January 20th, 2011
02:34 PM ET

A reluctant mini-satellite finally sprang from its mother ship this week, and NASA used amateur radio operators to help find it and check on its status.

The NanoSail-D was supposed to deploy from the Fast Affordable Scientific and Technology Satellite, or FASTSAT, on December 6, but it just sat there for more than six weeks, refusing to come out of the barn.

Mission operators at the Marshall Space Flight Center in Huntsville, Alabama, kept the door open, hoping the NanoSatellite - about the size of a loaf of bread - would eventually emerge on its own, which it finally did on Wednesday.

"We knew that the door opened and it was possible that NanoSail-D could eject on its own," Mark Boudreaux, FASTSAT project manager at the Marshall Center, said in a press release. "What a pleasant surprise this morning when our flight operations team confirmed that NanoSail-D is now a free flyer."

That event triggered a three-day countdown until four doors are supposed to open like the blades on a ceiling fan, allowing a large polymer sail to pop out.

NASA had asked ham radio operators to listen for NanoSail-D's signal at 437.270Â megahertz and report their findings to the NanoSail-D dashboard.

By midday Thursday a signal had been detected, and the team in Huntsville determined the craft was operating normally, NASA reported.

NanoSail-D is expected to stay in low-Earth orbit for 70 to 120 days, depending on atmospheric conditions.

The purpose of the test mission is toÂ show that NASA canÂ deploy a solar sail and that it can deploy a mini-satellite without its host satellite later colliding with it.

6:00 pm ET May 17, 2021 RETWEET
Experts believe the B.1.617 variant is driving the huge wave in infections seen across India in recent weeks. The câ€twitter.com/i/web/status/1â€¦Gq
cnni

5:48 pm ET May 17, 2021 RETWEET
Even though hurricane season is still a couple weeks away in the Atlantic Ocean, the National Hurricane Center begaâ€twitter.com/i/web/status/1â€¦Yl
CNNweather

5:40 pm ET May 17, 2021 RETWEET
New York will adopt the US Centers for Disease Control and Prevention's guidelines to not require masks or social dâ€twitter.com/i/web/status/1â€¦04
cnni