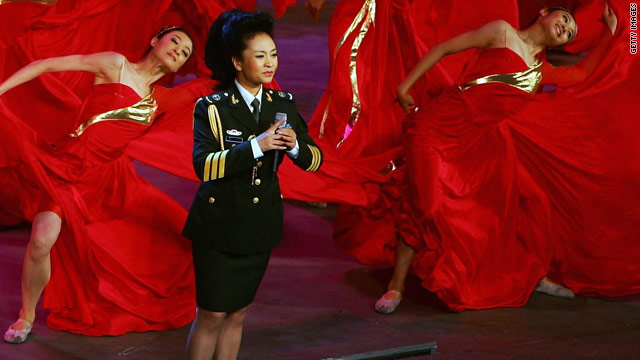 Peng Liyuan's fame as a singer in China may enhance or even overshadow her politician husband's image.
January 20th, 2011
01:32 PM ET

The wife of Chinese Vice President Xi Jinping is "China's most dazzling folk singer," according to a profile in Newsweek.

Peng is arguably more famous than her husband. She has millions of fans, thanks to frequent appearances on China Central Television over many years. She is a major general in the People's Liberation Army and is China's AIDS ambassador to the United Nations.

When Xi succeeds Hu Jintao as president next year, as most observers expect, China's first couple "will approach the glamour of the Kennedy administration," Kent Ewing writes in Asia Times.

"China will have a first family that mixes fame and beauty with power and privilege," Ewing observes.

Abuelaish is a Palestinian doctor who trained in Egypt, Saudi Arabia, Italy, England and the United States. He made a name for himself as a respected gynecologist who lived in Gaza but also spoke Hebrew and worked in Israeli hospitals.

In fact, he was the first Palestinian to be receive a staff position at an Israeli hospital.

"I worked all my life - a doctor with one leg in Israel and one leg in Gaza - to be an example of coexistence," he says on his website.

He was known as a peace activist even before January 2009 when an Israeli tank - responding to a Palestinian mortar attack - fired two shells into his home and killed three of his daughters and a niece. His wife had died of leukemia a few weeks earlier.

In the moments after his daughters were killed, his cries of anguish were heard on media outlets the world over. But audiences also heard him utter these words: "I shall not hate."

After the tragedy, Abuelaish moved to Canada and founded Daughters for Peace, a registered charity that advocates peace and understanding between Palestinians and Israelis and provides college scholarships for young Middle Eastern women.

Abuelaish is on a promotional tour for his book, "I Shall Not Hate: A Gaza Doctor's Journey on the Road to Peace and Human Dignity."

"I know that what I have lost, what was taken from me, will never come back," he writes in the book. "But as a physician and a Muslim of deep faith, I need to move forward to the light, motivated by the spirits of those I lost. I need to bring them justice. ... I will keep moving but I need you to join me in this long journey."

Sarah Palin's current favorite pundit is not what you might expect.

The conservative writer, radio host and Fox News contributor was a registered Democrat until 2008. She is an outspoken feminist who once was the president of the Los Angeles chapter of the National Organization for Women, according to a bio on her website.

She worked on election campaigns for Democratic Sens. Dianne Feinstein and Barbara Boxer of California as well as Bill Clinton's presidential campaign, but she also voted for Ronald Reagan and both Bushes.

She has confronted anti-abortion demonstrators, according to a Slate profile.

Now Bruce is all about Tea Party values and Palin.

Palin has used Bruce at least three times in recent months to help get her message out or bounce back from gaffes, according to Slate. A 14-minute interview with Palin figures prominently on Bruce's website.

And oh, by the way, Bruce is an out-of-the-closet lesbian.

"Informing her commentary is the fact that she is also a gay, pro-choice, gun owning, pro-death penalty, Tea Party Independent Conservative," her website says.

No pigeonhole in the world will fit that resume.