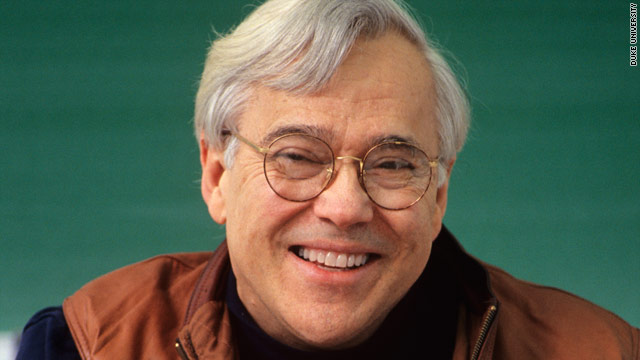 Reynolds Price, a renowned Southern writer and a professor at Duke University for more than 50 years, has died.

Price died of cancer Thursday at age 77, the university announced.

"With a poet's deep appreciation for language, Reynolds Price taught generations of students to understand and love literature," Duke President Richard H. Brodhead said in a statement on the university's website.

"Reynolds was a part of the soul of Duke; he loved this university and always wanted to make it better. We can scarcely imagine Duke without Reynolds Price."

"I don't think there's any question, he was the most important writer in North Carolina," Anthony Abbott, a retired Davidson College English professor, told the Charlotte Observer.

Price taught courses on creative writing and the work of 17th-century English poet John Milton. The professor, who called himself an "outlaw" Christian, also taught a course on the Gospels of the Bible, according to the university.

"I will always remember the young man who taught me literature. He had me mesmerized,ŌĆØ Madeline Hartsell, a 1962 Duke graduate who studied under Price, told CNN affiliate WRAL. ŌĆ£There are few teachers whom we remember and who we believe inspired us to write, to read and to love words. That was Reynolds PriceŌĆÖs legacy.ŌĆØ

His readings of Halloween stories were a campus tradition for years, the university said.

Price was good friends with singer James Taylor, the two collaborated on Taylor's song "Copperline," according to WRAL.

Price survived spinal cancer in the mid-1980s, but the aggressive treatment he underwent left him paralyzed and forced to use a wheelchair for the rest of his life, according to the Observer.

His disability "was a mere complexity in the ongoing narrative which God intended me to make of my life," he wrote in his 2006 book, "Letter to a Godchild."

According to the Observer, there will be no public funeral. His body will be cremated and his ashes scattered near his home in Durham, North Carolina.

Some startups are bucking the SUV trend and unveiling tiny electric cars that will carry just one or two people andŌĆtwitter.com/i/web/status/1ŌĆ”Iw
cnni

3:01 am ET April 15, 2021 RETWEET
Nepal's population of one-horned rhinos has increased to its highest number in more than 20 years, partly owing toŌĆtwitter.com/i/web/status/1ŌĆ”d3
cnni

2:44 am ET April 15, 2021 RETWEET
A security camera captured footage of a meteor that was seen bursting through the sky in FloridaŌĆtwitter.com/i/web/status/1ŌĆ”j0
cnni

2:31 am ET April 15, 2021 RETWEET
A devastating frost has affected 80% of vineyards in France's primary wine growing areas, according to the EuropeanŌĆtwitter.com/i/web/status/1ŌĆ”Bp
cnni

2:01 am ET April 15, 2021 RETWEET
MIT researchers scanned intricate spider webs with a laser and turned them into music. The eerie soundtrack couldŌĆtwitter.com/i/web/status/1ŌĆ”pQ
cnni