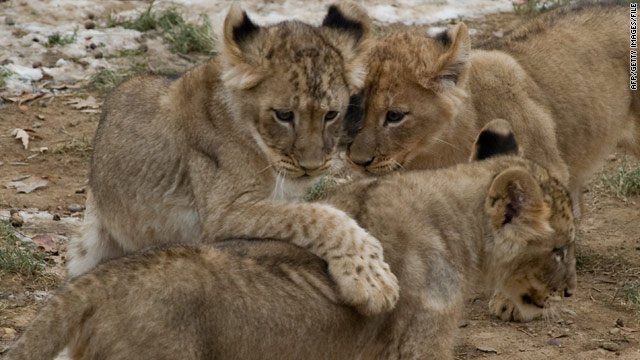 An Arizona restaurateur has unleashed a storm of criticism for his plan to serve lion tacos next month.
January 21st, 2011
04:31 PM ET

Sorry, it’s tough to write this piece because I keep getting hung up on the juxtaposition of those two words. It sounds like something out “The Freshman.”

According to the Arizona Daily Star, a Tucson eatery will be serving up the kingly dish for one of its weekly exotic taco nights. Past efforts have included python, elk, kangaroo and turtle, the paper reported.

Give credit to owner Bryan Mazon, who was more than frank when asked the reasoning behind his decision to put the majestic animal on a tortilla.

“I'm doing the African lion to get my name out,” he said. “I've never tried it myself, but this one really caught my eye.”

Well, Mr. Mazon, judging from your Facebook page, it caught the eye of a few other folks.

While there were messages of support and others asking whether Mazon would be willing to ship orders of tacos out of state, plenty of people were downright ticked.

“What did you want? attention? congratulations, i know you. i also know who hitler, ted bundy, and michael vick are,” wrote poster Tricia Rider Kachymers.

A post from Jon Ailetcher was markedly harsher: “[Expletive]. Nothing but a way to get promotion you [expletive] [expletive]. Way to help kill the animal kingdom. [EXPLETIVE] YOU!!!”

The Daily Mail in London reported that National Wildlife Humane Society President Patrick Webb wrote Mazon, saying, “I realize this is a publicity effort, and will not result in profitability in serving lion, but sometimes no amount of publicity is worth the potential negative effects on vulnerable species.”

The lion tacos will be available February 16, wedged between Tequila Tuesday and Dollar Beer Thursday.

They will cost $8.75 apiece, Mazon told the Daily Star, explaining that a pound of ground lion will run you about $100. The meat comes from a farm in Perris, California, about 60 miles east of Los Angeles.

His wife, the chef at Boca Tacos y Tequila, will make about eight tacos per pound.

I know what you’re wondering. It's the same thing I’ve been asked by a few of my colleagues in the past hour: Is this [expletive] legal?

Interestingly, Mazon told the Daily Star that he got the idea last year when a restaurant announced that it was going to serve lion burgers for the World Cup, held in South Africa.

Our pals over at CNNMoney covered that one and reached out at the time to the U.S. Food and Drug Administration, whose spokesman said that African lion is not a federally protected endangered species and that it qualifies as game meat.

I’m not sure if it’s surprising that the lion burger joint was in Mesa, about 100 miles northwest of Tucson, but I’m starting to get the impression that Arizonans have some wacky culinary tastes. How about you?