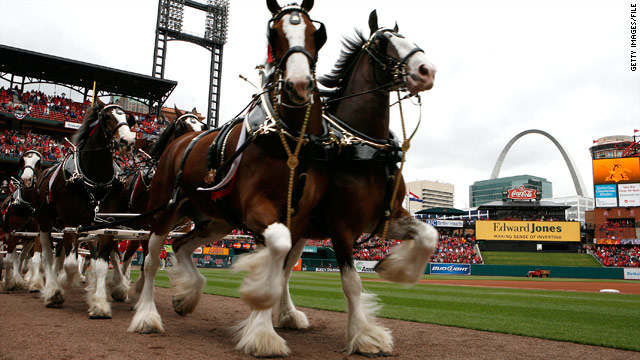 Anheuser-Busch and its Clydesdales are gearing up to be exclusive beer advertiser for the Super Bowl for the 23rd year.
January 21st, 2011
07:05 PM ET

I work for one of the Best Companies: From interesting assignments to big scholarships to stints abroad, meet 10 employees at the top 10 companies on Fortune's list.

Pouring gas on an economic recovery: If you've been unable to dig out your car after one of the numerous snowstorms blanketing the country, you may not have noticed that the average price of gasoline nationwide has steadily crept up over the past few weeks. And prices might move even higher.

Anheuser-Bush unleashes the Clydesdales: The brewer will be the exclusive beer advertiser for the Super Bowl for the 23rd consecutive year. Take a sneak peek at this year’s ads.

Groupon regret? Unload those deals on Lifesta: Hate those wine-tasting classes? Don't need another nine yoga sessions at the studio on the other side of town? You can't return them, but you can sell them.