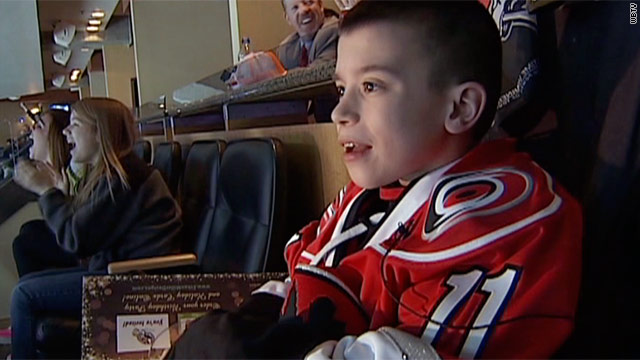 He and his family were season ticket holders for the minor-league Albany (New York) River Rats - until the team moved to Charlotte, North Carolina, last spring and changed their name to the Checkers.

Over the years, players and officials with the team had gotten to be friends with Zach, who has had numerous surgeries, including the amputation of both legs, to treat neurofibromatosis.

Neurofibromatosis is a genetic disorder that causes debilitating tumors to grow on nerve tissue, according to the National Institutes of Health. It is incurable.

The separation from the team has been hard on Zach, whom players call Bug, but things are about to change.

Zach's parents, Randy and Danielle Bennett, have decided to sell their house in Albany and move to Charlotte, CNN affiliate WCNC-TV reports, and the team is helping them do it.

"We were contemplating it back and forth, and when the team said they were sold and they were headed down to Charlotte, that was kind of a no-brainer for us," Randy Bennett told WCNC.

Last week the Checkers flew the family to Charlotte, where team mascot Chubby met them at the airport. Zach and his sister Jenna ceremonially dropped the puck to start the team's annual Race Night charity game and sweater auction, which raised $20,000 to cover the family's moving expenses, according to the Checkers' website.

The planned move isn't only for hockey, of course.

For one thing, the family expects to be closer to medical facilities. They now drive about two hours to Springfield, Massachusetts, for Zach's appointments, according to the Albany Times-Union newspaper.

The weather will be easier to take, too.

"We hate the winter," Randy Bennett told the Times-Union. "How did we become a hockey family?"

Weed is not good for your heart, studies say cnn.it/2DVnLqT https://t.co/VOMnXgfsAE
cnni