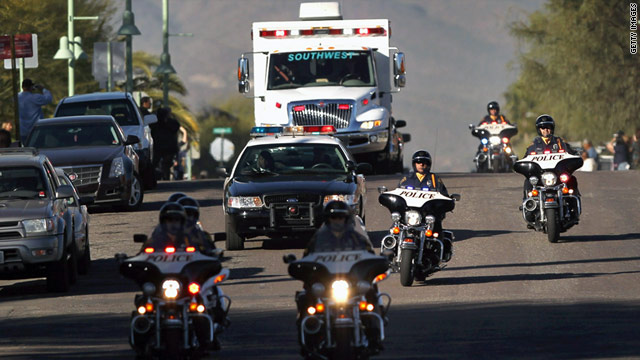 Rep. Gabrielle Giffords on Friday left the Tucson hospital where she has been treated since a January 8 gunshot wound, traveling under police escort down streets lined with well-wishers.

Laying on a gurney, she then boarded an aircraft at Davis-Monthan Air Force Base for a flight to Houston, Texas, where she is expected to continue her recovery. She arrived shortly after 1 p.m. CT.

Although previous reports had indicated she would move directly to a rehabilitation facility affiliated with Memorial Hermann Hospital in Houston, she will instead be taken to the hospital's trauma center for evaluation and treatment, said Dr. Dong Kim, a neurosurgeon at the hospital.

"She's not quite ready for rehabilitation yet," he said, citing concerns about ongoing medical issues. He declined to elaborate.

A group of archaeologists has found the largest ancient city ever discovered in Egypt, dating back 3,000 yearsâ€twitter.com/i/web/status/1â€¦1u
cnni