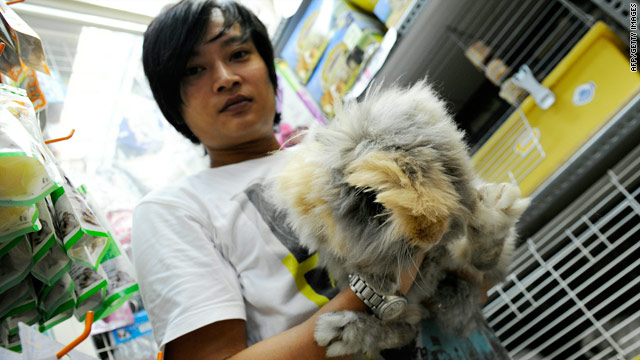 Year of the Rabbit: Deadly start for impulse pet buys

Dead rabbits are showing up in Chinese mailboxes as pets ordered for the Year of the Rabbit aren’t surviving the shipping process, the Shanghai Daily reports.

The Year of the Rabbit commences on February 3 under the Chinese lunar calendar and bunnies are in demand to celebrate it. One online search showed more than 600 vendors selling rabbits at prices from 15 to 2,000 yuan ($2.25 to $300), Shanghai Daily reported.

But, the paper said, the rabbits can spend five days in shipment and many have suffocated or frozen to death in the small boxes in which they are sent.

At least one vendor had stopped shipments because of the deaths, the paper reported.

People for the Ethical Treatment of Animals issued a statement from its Shanghai office on Friday urging people not to bring a rabbit into their home for the Chinese New Year.

"Rabbits are complex animals, and potential caretakers - who often purchase the animals on a whim - rarely understand the specific needs of their new companions," the statement said. “Once the novelty has worn off, many bunnies are neglected, dumped at animal shelters, or simply turned loose in the wild.”

That’s the problem an ocean away from China at the University of Victoria in British Columbia, Canada.

The school is saying unwanted pet rabbits dumped on its campus after February 28 will be killed, according to a report in the Victoria Times Colonist.

The university has been trying to rid its campus of the creatures for two years because of damage to landscaping and playing fields, according to the Times Colonist report. More than 800 have been trapped and moved to sanctuaries, it said.

But people are still seeing the campus as a place to dump their pets so the university is adopting the get-tough policy.

“While UVic is willing to dedicate some resources to rabbit removal, it is unrealistic for the university to divert funding to this task in perpetuity,” facilities management director Tom Smith told the paper.